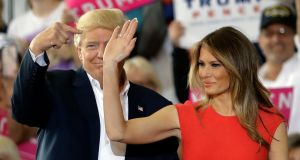 US president Donald Trump returned to campaign mode on Saturday in front of a 9,000-strong crowd in Florida, accusing the media of working to undermine him. At the end of a tumultuous week for the president, which saw him lose his national security adviser and battle recurring questions about his administration’s links with the Kremlin, Mr Trump attempted to set out the key achievements of his first month in office, highlighting his actions on immigration and a clampdown on lobbying.

While dozens of positions in the administration remain unfilled, including the post of national security adviser, labour secretary and deputy secretary of state, Mr Trump repeated the claim he made in a press conference on Thursday that his administration was running “like a fine-tuned machine”.

Within minutes of beginning his speech, he criticised the media, pledging to speak to people without the “filter” of fake news. “They just don’t want to report the truth. They have become a big part of the problem. They are part of the corrupt system,” he told the crowd. He cited previous presidents’ difficulties with the media, including Abraham Lincoln, Andrew Jackson and Thomas Jefferson.

“We are not going to let the fake news tell us what to do, how to live or what to believe. When the media lies to people, I will never, ever let them get away with it. I will do whatever I can that they don’t get away with it. They have their own agenda, and their agenda is not your agenda.”

Republican senator John McCain expressed concern at the president’s comments about the media. “That’s how dictators get started . . . by suppressing free press,” he said.

Mr Trump’s criticism of how the mainstream press has reported on his presidency was echoed by White House chief of staff Reince Priebus. He told NBC on Sunday that while the president “believes in the free press, the first amendment” and “loves our constitution”, the coverage of his presidency had been flawed, criticising newspapers’ decision to run with unnamed sources “to create stories”.

With Mr Trump seeking to appoint a successor to former national security adviser Michael Flynn, who was dismissed a week ago after he falsely represented the details of a phone call with the Russian ambassador to the United States, Mr Priebus said he did not believe that what Mr Flynn had done was illegal.

Referring to a 1799 law known as the Logan Act, which prohibits private citizens from engaging in diplomacy with foreign powers, Mr Priebus said his information was that Mr Flynn’s actions were not in breach of the law.

Mr Priebus said that the president believed that “there was nothing wrong with talking to the Russian ambassador about the current sanctions being put in place by the Obama administration”. Rather, it was Mr Flynn’s decision not to inform the administration and vice-president Mike Pence about the talks that prompted the president’s request for him to resign.

“My view is what he did wasn’t illegal . . . it’s the fact that he wasn’t straight and honest,” he said. The Washington Post reported last week that Mr Flynn did not tell FBI officials that he had discussed sanctions during the phone call with Russian ambassador Sergei Kislyak in December.

Mr Trump is due to interview four candidates to replace Mr Flynn as the nation’s top security official after his first choice, retired vice-admiral Robert Harward, turned down the position last week.