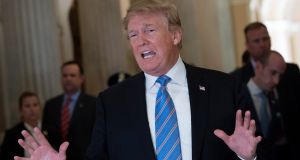 US president Donald J Trump speaking to the media after delivering remarks to the House Republican conference on Capitol Hill in Washington on Tuesday. Photograph: Chris Kleponis/ EPA/pool

President Donald Trump has signed an executive order ending the process of separating children from their parents after they are detained crossing the US border illegally.

It was a dramatic turnaround for Mr Trump, who has been insisting, wrongly, that his administration had no choice but to separate families apprehended at the border because of federal law and a court decision.

The news in recent days has been dominated by images of children held in cages at border facilities, as well as audio recordings of young children crying for their parents.

Until Wednesday, Mr Trump, Homeland Security Secretary Kirstjen Nielsen and other officials had repeatedly argued the only way to end the practice was for Congress to pass new legislation, while Democrats said he could do it with his signature alone.

That was what he did on Wednesday. “We’re going to have strong, very strong borders, but we’re going to keep the families together,” said Mr Trump who said he did not like the “sight” or “feeling” of children separated from their parents.

He said his order would not end the “zero-tolerance” policy that criminally prosecutes all adults caught crossing the border illegally. The order aims to keep families together while they are in custody, expedite their cases, and ask the Department of Defence to help house families. Justice Department lawyers had been working to find a legal workaround for a previous class-action settlement that set policies for the treatment and release of unaccompanied children who are caught at the border.

Mr Trump’s order is likely to create a new set of problems involving length of detention of families, and may spark a fresh court fight. Also playing a role in his turnaround was First lady Melania Trump. One White House official said Mrs Trump had been making her opinion known to the president for some time that she felt he needed to do all he could to help families stay together, whether by working with Congress or acting on his own.

Ms Nielsen travelled to Capitol Hill Wednesday afternoon to brief politicians. And members on the fence over pending immigration legislation headed to the White House to meet with Mr Trump. Mr Trump had tweeted earlier: “It’s the Democrats fault, they won’t give us the votes needed to pass good immigration legislation.

“They want open borders, which breeds horrible crime. “Republicans want security. But I am working on something — it never ends!” The administration recently put into place a “zero tolerance” policy in which all unlawful border crossings are referred for prosecution, a process that moves adults to the custody of the US Marshals Service and sends many children to facilities run by the Department of Health and Human Services.

Under the Obama administration, such families were usually referred for civil deportation proceedings, not requiring separation. The policy had led to a spike in family separations in recent weeks, with more than 2,300 minors were separated from their families at the border from May 5th until June 9th, according to the Department of Homeland Security.

Two people close to Homeland Security Secretary Ms Nielsen said she was the driving force behind the plan to keep families together after they are detained crossing the border illegally. One of the people said Ms Nielsen, who had become the face of the administration’s policy, had little faith that Congress would act to fix the separation issue and felt compelled to act. Ms Nielsen was heckled at a restaurant on Tuesday evening and has faced protesters at her home.

Earlier, Pope Francis criticised the Trump administration’s policy of forcibly separating children from their parents at the US-Mexico border, as he blasted populist political leaders around the world for creating a “psychosis” around the issue of immigration.

In an interview with Reuters, the 81-year old Argentine pontiff said he supported recent statements by the US Catholic bishops conference that described the US crackdown as “immoral” and “contrary” to the values of the church.

“It’s not easy, but populism is not the solution,” the pope said.

The remarks by the pope – who throughout his five-year papacy has consistently spoken of the need to welcome refugees and migrants – add to the chorus of outrage at the US policy, which involves the arrest of adults crossing the southern border illegally, while taking their children away to separate government facilities.

On Tuesday, Tom Donohue, the head of the US Chamber of Commerce, the biggest business lobby group in the US, denounced the practice. “This is not who we are and it must end now,” he said.

The pope’s comments will not only resonate in the US but also in Europe, including in Italy, where a new populist government has taken a tough line on immigration, recently turning away a rescue boat carrying nearly 630 migrants.

“I believe that you cannot reject people who arrive. You have to receive them, help them, look after them, accompany them and then see where to put them, but throughout all of Europe,” Pope Francis said.

The Italian backlash against immigration is being led by Matteo Salvini, the head of the far-right League and the country’s new interior minister, who has attacked the pope and church officials for being too welcoming towards refugees.

The pontiff, however, said European populists were creating a “psychosis” over immigration, and warned that Europe needed immigration as it faced a “great demographic winter”.

“Some governments are working on it, and people have to be settled in the best possible way, but creating psychosis is not the cure,” the pope said, adding: “Populism does not resolve things. What resolves things is acceptance, study, prudence.”

The pope’s renewed emphasis on protecting refugees and migrants is increasingly at odds with public opinion in Italy, where large chunks of the electorate – including practising Catholics – have embraced Mr Salvini’s crackdown.

Mr Salvini – who is aligned with conservative clerics within the church opposed to Francis’s vision of a reformed, more open church – has been rising in the polls partly by arguing that immigrants are threatening Italians’ security, jobs and access to social services. As well as denying rescue boats access to Italian ports, Mr Salvini has vowed to deport thousands of illegal immigrants after detaining them in closed facilities.

The pope has clashed with Mr Trump on immigration since the 2016 US presidential campaign, when the pontiff celebrated mass on the Mexican side of the US border.

Catholic clergy in America have led the charge against the new enforcement policy. “Forcibly separating children from their mothers and fathers is ineffective to the goals of deterrence and safety and contrary to our Catholic values,” said Joe Vasquez, the bishop of Austin and chairman of the US Conference of Catholic Bishops, in a statement on June 1st.

“Family unity is a cornerstone of our American immigration system and a foundational element of Catholic teaching,” he added.

“I am on the side of the bishops’ conference,” the pope told Reuters.