France and Germany agree euro zone budget but not its details

Despite vast differences on capacity of fund, Macron remains ‘pragmatic’ about numbers 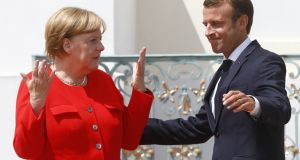 Nine months after he flagged the idea of a euro zone budget, French president Emmanuel Macron insisted he had secured Angela Merkel’s political agreement for such a new euro zone budget to go live from 2021 in parallel with the next EU budget.

Pressed on the proposed budget’s capacity and function, he said there was a need to consult other member states on details because it would be “counter-productive” to present them with a fait accompli.

“We have created the basis for a euro zone budget with its own governance . . . with mechanisms we want to define by the end of the year,” he said. “There are a lot of technical details we don’t want to preoccupy ourselves with today.”

Asked if they had bridged the gap on the budget capacity – Mr Macron envisions a €300 billion fund, and Dr Merkel one of “low double-digits” – the French president said he remained “pragmatic” about numbers.

“Germany and France want a euro budget with its own governance where there is nothing today,” he said.

The German leader declined to put a number on the budget’s capacity, but said it would finance itself from annual member state contributions, possibly a financial transaction tax and perhaps European funds.

In a joint declaration, they said the euro budget would be “pluriannual”, with euro countries making “strategic decisions” and the European Commission deciding on expenditure.

As well as a budget to boost convergence of euro area economies, France and Germany have agreed an emergency loan mechanism within an expanded ESM bailout fund with a security net or backstop for euro area banks.

Dr Merkel said talks were “at their most complicated” on the new euro budget and the ESM. The fund would probably retain its name, she said, but additional functions – such as emergency, short-term loans to member states facing liquidity problems – would require a change to its treaty.

The fund would have an “enhanced role” in devising bailout programmes and liaise with the European Central Bank and European Commission, but the nature of the latter co-operation was left open in the Franco-German paper. In a second step, the leaders agreed the ESM should be transferred into EU law.

She also made the case for reforming EU institutions, transnational European election lists from 2024 and an end to each member state getting a European Commission portfolio.

“I share emphatically the idea of Emmanuel Macron that the big member states should relinquish first, we are ready to do that,” she said.

The chancellor insisted their reform proposals would find broad political support in Berlin, despite growing political instability over migration.

As she faces a two-week deadline to agree new migration deals at EU level – or risk the collapse of her coalition – Mr Macron backed her efforts to find ways with EU partners to reduce asylum numbers at home.

“France and Germany agree bilaterally that it has to be possible that all those registered [for asylum] in one Schengen country are sent back there as quickly as possible,” he said.

As well as increased efforts for asylum facilities in third-party countries, the two leaders reiterated – in the face of huge resistance from central and eastern Europe – the need for a common European asylum system for a “fair balance of responsibility and solidarity”.

On security and defence, Mr Macron secured Berlin backing for a European intervention force, linked “as closely as possible” in combat and air systems to the EU’s new “permanent structured co-operation” (Pesco).

Ahead of a ministerial meeting, attended by European Commission president Jean-Claude Juncker, the French and German leaders agreed to present a new Élysée Treaty by year-end. It will, among other things, push reciprocal language learning and progress a decade-old plan for a joint corporate tax rate.

On the research front, they backed the idea of a European university network and announced plans for a Franco-German centre for research on artificial intelligence.

Asked about US president Donald Trump’s warnings of an immigration-linked crime spike in Germany, the chancellor said recent statistics, showing a drop in crime, were “heartening” and “spoke for themselves”.