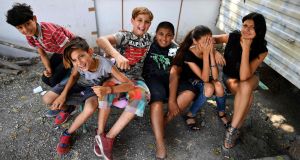 Children from the Roma community at the “River Village” camp on the outskirts of Rome: interior minister Matteo Salvini has defended his plan for a Roma census. Photograph: Alberto Pizzoli/AFP/Getty

Matteo Salvini vowed to turn “words into action” in his drive to root out and expel thousands of nomadic Roma from Italy as he shrugged off critics who said the far-right interior minister was adopting illegal policies reminiscent of the country’s fascist past.

Mr Salvini, who has seen a jump in his approval ratings in the little under three weeks he has been in office, has called for a new census of Roma and for all non-Italian Roma to be expelled as part of his .

He also praised on Twitter the demolition of an “illegal” house used by Roma in Turin – which had been ordered by a local council controlled by Salvini’s League party – even as he was condemned by rival politicians and a top Jewish leader.

Mr Salvini’s move against the Roma comes amid a hard line against migrants entering Europe, which last week saw him to refuse to allow a ship carrying more than 600 people rescued from the Mediterranean dock in Italy, forcing it to divert to Spain.

The EU was on Tuesday considering plans for migrant processing centres in North Africa as the continent is convulsed by a row over migration.

The developments in Italy have caused the first major rift between Mr Salvini and his Five Star Movement coalition partner. Luigi Di Maio, the leader of the anti-establishment M5S, called Mr Salvini’s order for the creation of a new Roma registry “unconstitutional”. A similar census pitched by the former prime minister Silvio Berlusconi was blocked by an Italian court.

It was also lambasted by Noemi Di Segni, the president of Italy’s union of Jewish communities, who said the proposal recalled the fascist race laws of the late 1920s and 1930s. The former centre-left prime minister Paolo Gentiloni also tweeted his disgust, saying: “Yesterday the refugees, today the Roma, tomorrow guns for all.”

At first, Mr Salvini seemed prepared to back down from his new policy but in a tweet on Tuesday afternoon he promised to stand by his call for mass expulsions. “I don’t quit and we’re moving forward,” he said in a tweet.

He also pointed to a 2012 proposal by politicians in Milan, which included a call for a census of the Roma community in the city. That register, according to an article in Corriere della Sera, was part of a project to help families and children overcome “discrimination and the denial of dignity” and opposing “irregularity and illegality”.

Mr Salvini said such proposals were deemed good when they came from the left, but racist when they were proposed by him. “Italians and their security comes first,” he wrote.

The row is the first sign of a potentially serious split between Mr Salvini and Mr Di Maio, who has been overshadowed in the first weeks of government and appears eager to rein in the far-right leader.

The two parties – Mr Salvini’s League and Mr Di Maio’s M5S – are both populist, but the League has tended to be much more outspoken about its xenophobic and racist attitudes towards migrants and non-Italians.

Mr Salvini’s intense focus on immigration and “foreigners” has collided with M5S’s priorities of economic fairness and labour policy.

Even if M5S tries to wrestle the agenda from Mr Salvini, polls show that Italians are backing the interior minister, who is now polling about equal to Mr Di Maio, at 29 per cent, in terms of popularity. – Guardian