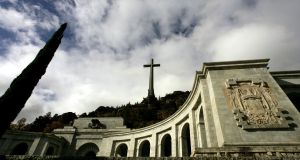 The Valley of the Fallen: a monument to the Francoist combatants who died during the Spanish civil war and Franco’s final resting place just outside Madrid. File photograph: Philippe Desmazes/Getty Images

Spain’s prime minister Pedro Sanchez has said he wants to remove the remains of the late dictator General Francisco Franco from a controversial mausoleum and turn the site into a monument for reconciliation.

Mr Sanchez told national broadcaster TVE that Spain “cannot afford symbols that separate Spaniards” and that he wants to turn the Valley Of The Fallen into “a memorial about the fight against fascism”.

More than 33,000 dead from both sides of Spain’s 1936-1939 civil war are buried alongside Franco’s remains at the neo-classical mausoleum northwest of Madrid.

The socialist leader revealed the idea during his first media interview since taking office earlier this month, following a parliamentary vote that ousted the previous conservative administration of Mariano Rajoy.

The conservatives have also said that those campaigning for digging up the anonymous mass graves in the Valley of the Fallen or elsewhere across the country were reopening a painful chapter in history.

“It’s not about opening wounds, it’s about closing them,” Mr Sanchez said in Monday’s interview.

He said his government would work to fulfil a parliamentary resolution from last year that called to exhume Franco’s remains, hand them over to the dictator’s relatives and turn the valley into a memorial for the Spanish Civil War.

The then ruling Popular Party abstained, allowing the non-binding resolution to pass in the country’s lower house, but did not move to carry out the proposals.

With its 150-metre-tall cross that can be seen from miles away, Franco presented the grandiose Valley Of The Fallen complex as a symbol for national reconciliation.

But victims’ relatives and activists have campaigned against it because forced labour was used in its construction and because it keeps in a prominent location, near the basilica’s altar, the tomb of the dictator who ruled Spain until his death in 1975.

Some relatives have filed lawsuits seeking to open the niches of those buried without their families’ knowledge or consent.

But the decrepit state of the 33,847 bodies has become an obstacle, especially after an independent investigation found that water leaks and dampness in chapels and crypts had turned some of the niches into “piles of bones”.

The Francisco Franco Foundation, which receives state funding despite some calls to end it, has pledged to legally fight any moves to exhume Franco’s bones.

A petition against Mr Sanchez’s plans posted online on Sunday by the foundation called “not to desecrate” the Valley of the Fallen and “to respect the death”.

It received more than 24,000 signatures of support by Monday night.