Children can be heard wailing and calling out for their parents in an audio recording purportedly captured from inside a US Customs and Border Protection detention facility and given to news organisation ProPublica. 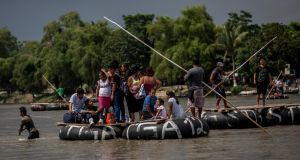 A mother from El Salvador swivelled away from the fire where she was toasting some tortillas at a migrant shelter in a Mexican border town.

The woman, Lucía Carmen Flores Sánchez, had just learned on Tuesday about the Trump administration’s policy of separating children from their parents at the US border.

“Oh,” she said, a look of surprise on her face.

Fleeing gang violence in her country, she had been travelling overland with her mother and her daughter (8) and had made it as far as Tapachula, a few miles from the border with Guatemala. Her plan was to reunite with her father in the northern Mexican state of Baja California. From there, she had hoped to figure out a way to cross into the United States with her daughter.

But the bad news had suddenly thrown her plans into doubt. “Maybe better to stay in Baja California,” said Flores (27) glancing at her daughter. “I’m not going to lose the only thing I’ve got.”

Word of the Trump administration’s new “zero tolerance” policy, which calls for prosecuting everyone who crosses the border illegally, has been travelling along the migrant trail that winds through Mexico and Central America. People learn of it by television, by social media and, mostly, by word of mouth.

While the policy has stirred controversy in the United States, with lawmakers from both parties calling for its end in the face of defiance from the Trump administration, it has sowed confusion for the migrants bound for the United States, who are struggling to make sense of what it means for the rest of their journey.

Some, like Flores, are now considering staying in Mexico. Some are pausing their trips to see if the separation policy is reversed; on Tuesday evening, Republican senators in Washington moved to try to defuse the crisis and find a way to end the policy.

Others are weighing the risks of an illegal crossing against the chances of success with an asylum petition. And an increasing number, migrants’ advocates say, will heed the siren call of human smugglers, who will try to use the separation policy to sell their services, arguing that they are the migrants’ best hope for getting across the border.

The smugglers will even be able to increase their prices for the work as a result of the Trump administration’s policy, advocates predict. “Any restrictive measure in terms of migration and refuge is going to favor the business of the transnational criminal networks,” said Ramón Márquez, director of La 72, a migrant shelter in Tenosique, Mexico.

The Trump administration’s zero-tolerance policy, enacted last month amid a sharp increase in seizures along the southwest border of the United States, has resulted in the separation of about 2,000 children from their parents in the past six weeks.

The policy has set off a growing wave of outrage around the world, including at the United Nations. Administration officials said the policy was intended to dissuade migrants – specifically families – from trying to cross the border unlawfully.

Until the announcement of the zero-tolerance policy, and under previous administrations, adults travelling with their minor children were generally exempted from criminal prosecutions.

This was a well-known policy throughout Mexico and Central America, and was often part of the calculus for migrants: Those travelling with their children knew that if they were detained and put into deportation proceedings, they would most likely be released quickly, sometimes with an ankle monitor, to await their day in court.

That was what Flores understood, until she was told of the new approach. “I had thought that if a mother like me had gone to the border with a child, I’d be allowed to leave detention,” she said, still trying to get her head around the news she had just received at the Jesús El Buen Pastor del Pobre y el Migrante Shelter.

“That was the mentality,” she said. “But hearing this, better not.”

Yolanda López (21) was standing nearby. She, too, was hearing the news of the separations for the first time. She said she had fled El Salvador with her two young children after their father, a gang member, violently threatened to take them away from her. And like Flores, she was hoping to figure out a way to cross into the United States.

But she found herself reconsidering. “Maybe it’s best not to,” she said as she thought about her new circumstances. “What bad luck.”

The Trump administration said the zero-tolerance policy was intended, in part, to stop criminals masquerading as the parents of children from getting into the country more easily, even though only a tiny fraction of the total number of families apprehended at the southwestern border involve fraud.

Though the policy most directly affects families trying to cross the border unlawfully, it also appears to be having an impact on the broader population of migrants by contributing to what is for many a confusing swirl of recent immigration-related declarations and decisions by the Trump administration.

“They have implemented fear,” said Luis Rey García Villagrán, a migrants’ advocate in Tapachula, speaking about the Trump administration. “The situation has gotten worse.”

On Tuesday, García accompanied a group of Central American families to apply for letters of safe passage from the Mexican immigration authorities, which would enable them to travel freely to the northern border. There, the families planned to petition for asylum at an official port of entry.

But they were unsure whether the Trump administration’s new border policy would apply to them, too.

To one man travelling with his young son, it seemed like different border crossings had different rules. “These things make me think,” said the man, who only gave his last name, Hernández, out of fear of being located by the criminal gang in Honduras that had forced them to flee.

“I’m not the kind of father who’s going to leave his kids.”

Among the confusing signals migrant families had recently picked up from the Trump administration was the decision last week by attorney general Jeff Sessions that generally barred domestic and gang violence as grounds for asylum.

All the families gathered outside the immigration office with García, the migrants’ advocate, said they were fleeing gang violence, which has been a common basis for asylum petitions by Central Americans in recent years.

One of the men said he, his wife and four children had fled Honduras because of violent extortion threats by a gang. They had heard about the ruling by Sessions after arriving in Mexico. It was a dispiriting blow to their hope for American sanctuary, but it was not going to deter them, said the man, who gave only his first name, Alexander, out of fear the gang would track him down.

Going back was not an option, he said, and remaining in Mexico was not much better. That left the United States, Alexander said, even if nobody seemed to know what would happen to them at the border. “I’m always going to try,” he said. – New York Times