France offers to take some migrants from Aquarius ship 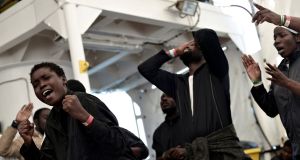 Migrants sing on the deck of MV Aquarius, a search and rescue ship run in partnership between SOS Mediterranee and Medecins Sans Frontieres on their way to Spain. Photograph: Reuters

Spain, meanwhile, said that France had offered to help take in migrants from a ship that Italy had previously turned away.

The vessel, called Aquarius and due to dock in Valencia on Sunday, is now under escort from a Spanish navy patrol boat, the government in Madrid said in emailed statements on Saturday.

Mr Salvini’s battle to curb arrivals from across the Mediterranean has rocked relations between the new Italian governing coalition and France just over a week after the administration led by the League party and the Five Star Movement was sworn in. The spat could threaten broader efforts led by France and Germany to reform euro area governance.

“Two other ships with the flag of Netherlands - Lifeline and Seefuchs - have arrived off the coast of Libya, waiting for their load of human beings abandoned by the smugglers,” Mr Salvini wrote Saturday on his Facebook account.

“These gentlemen know that Italy no longer wants to be complicit in the business of illegal immigration, and therefore will have to look for other ports (not Italian) where to go.”

Lingering political tensions over the unresolved question of how to control immigration from outside Europe have now broken out into the open, and the fallout is reshaping alliances and stoking old rivalries from Rome to Berlin, Paris and Vienna.

“Italy is facing giant challenges and I can understand that in the past Italy got the feeling it didn’t receive enough solidarity from European countries,” German foreign minister Heiko Maas said in an interview with Corriere della Sera, adding that he invited his Italian counterpart Enzo Moavero Milanesi to Berlin.

Salvini, leader of the anti-immigrant League, lost no time in falling out with some close European allies over his decision to deny access to port for a refugee vessel earlier this month. His stance also forced uncomfortable decisions in Spain, which was forced to take in the ship turned away from Italy with 629 migrants on board, and is threatening chancellor Angela Merkel, who faces renewed domestic turbulence over her open-door stance on migrants that could yet spell her early departure.

“As a minister and a father, they can attack me and threaten me as much as they want, but I do not give up and I do it for the good of all,” Mr Salvini added on Facebook.

France has offered to take those migrants from the Aquarius that express a desire to go there, Spanish deputy prime minister Carmen Calvo said in a statement sent by her ministry. French president Emmanuel Macron and Italian prime minister Giuseppe Conte on Friday pledged to work together on containing migration across the Mediterranean as they tried to put a spat about the issue behind them.

Meanwhile, Spanish coastguards reported waves of migrants trying to reach Spanish shores from North Africa in boats. As many as 933 people have been rescued in the Western Mediterranean and Straits of Gibraltar over the past 48 hours, the Spanish sea rescue service Salvamento Maritimo said on its twitter account. Four have died, it said. - Bloomberg