Clock ticking for Merkel on refugees and EU reform 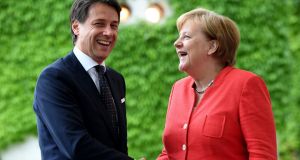 Angela Merkel is a busy woman. She has just two weeks to pull some sort of refugee deal out of her hat to calm her Bavarian allies and save her coalition.

With no time to lose, the inaugural visit of Italy’s new prime minister Giuseppe Conte to Berlin on Monday evening was a chance to sound him out on a bilateral refugee deal.

On Tuesday her crisis diplomacy will continue when French president Emmanuel Macron and his cabinet arrive for talks outside Berlin. While the refugee standoff – and deadline – will loom large, the two sides are coming together in a bid to finalise Franco-German EU reform proposals. Nine months after Macron’s Sorbonne speech, the joint proposals are proving a difficult delivery.

Paris officials are unimpressed by Merkel’s belated response and suggest Berlin, after 15 years of waiting, has forgotten how to deal with Paris as an equal partner. That irritates German officials and what they see as Paris expectations for Berlin to jump through rhetorical hoops set up by the French president.

Aware they are doomed to succeed, however, officials are working overtime to find common ground before next week’s EU summit.

But German officials shy away from anything that looks like a “transfer union” and La Maire has reportedly agreed that such funds will have to be paid back. The fund shrank in Merkel’s cautious response to a “low double-digit” sum. But to complement this, Berlin proposes short-term loans from the ESM bailout fund to be paid back in full by any crisis recipient.

Finally, La Maire concedes in this week’s Der Spiegel magazine that German resistance means Macron’s euro finance minister proposal will come “at the end of the process as the last piece of the puzzle”.

Shrugging off reports of vast differences on common security, defence and security policy, Merkel insisted in her weekend podcast that Germany and France had “moved forward a great deal” here.

Finally the two have to bridge differences on an EU response to US tariffs. Merkel wants European Commission intervention to cushion the blow to Germany’s car industry. Macron fears anything less than a tough line will see the Trump administration next impose agriculture tariffs – hitting French farmers.