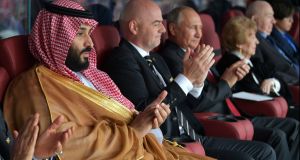 Saudi Arabia’s crown prince Mohammed bin Salman appeared in public on Thursday for the first time since mid-April at the opening of the World Cup in Moscow, where his team lost 5-0 to Russia.

The main purpose of the visit was not football but to discuss with Russian president Vladimir Putin the management of global oil exports ahead of next week’s meeting of the petroleum cartel (Opec).

Russia and Saudi Arabia, two of the world’s largest exporters, have been co-operating on crude supplies since 2016.

Two months ago Prince Mohammed (known as MbS) was told to suspend public appearances after heavy gunfire erupted near the king’s Ouja palace in Riyadh. Rumours that MbS had been wounded or killed were countered by official photographs showing him at cabinet meetings and a summit with his Emirati counterpart Mohammed bin Zayed.

While MbS has clamped down on domestic critics, there is open opposition to his assumption of full power by prominent exiles. Prince Khaled bin Furhan, a distant relative living in Germany, has called on princes Ahmed bin Abdulaziz, a former interior minister, and Muqrin bin Abdulaziz, former heir to the throne, to unite the royal family and security forces to depose MbS.

US-based Saudi journalist and author Jamal Kashoggi has accused MbS of forcing Saudis to “stick to the party line”, while on the regional stage, he has adopted the slogan, “You are either for us or against us.”

He has been encouraged by the Trump administration’s embrace.

Since his father King Salman assumed the throne in January 2015, MbS, now 32, has adopted interventionist regional policies and consolidated his grip on power by eliminating rivals, intimidating family members, appointing loyalists to senior positions, and assuming credit for reforms – curbing the religious police and passing the law permitting women to drive – achieved due to constant pressure from activists.

Claiming he seeks to contain Shia Iran’s regional ambitions on behalf of Sunni Saudi Arabia, MbS began his career in March 2015 by providing funds and guns to jihadis fighting the Iran-backed Syrian government, prolonging that war, and launching a war against allegedly pro-Iranian rebels in Yemen, devastating that country.

The Yemen war has divided the Gulf Co-operation Council, pitting Saudi Arabia and the Emirates against Kuwait, Oman and Qatar. The rift intensified when MbS blockaded Qatar. Sixth council member Bahrain has become a Saudi vassal.

MbS has campaigned against the 2015 deal with Iran to curb its nuclear programme in exchange for sanctions relief, risking Iran’s return to uranium enrichment and potential manufacture of nuclear weapons.

At home, MbS removed Muqrin bin Abdulaziz and Mohammed bin Nayef, who had been named successors of King Abdullah before his death in 2015.

Declared crown prince 2017, MbS – a defence minister and economic tsar – systematically seized all the reins of power. In September, he arrested both liberal and conservative clerics and critics and in November, he detained more than 300 princes, businessmen and officials on corruption charges and forced them to hand over cash and assets worth $800 billion.

MbS has also adopted a revisionist approach to Saudi history, falsely claiming the kingdom became deeply conservative in 1979 following the takeover of the Mecca mosque by fanatical puritans and the efforts of Shia Iran to export its revolution. The regime has even produced television dramas set in the 1970s showing a tolerant society where men and women mixed freely.

Saudi Arabia has long been regressive and repressive socially and culturally due to the powerful influence of Wahhabi clerics who have reigned alongside the House of Saud since the 18th century.

The Saudis have not only followed the Wahhabi ideology but also exported it to Muslim communities across the globe, where Saudi and Saudi-trained preachers have converted tens of thousands to fanaticism and militancy.