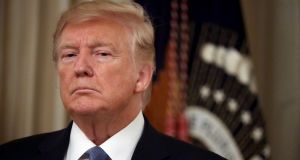 US president Donald Trump has called for the whistleblower to testify in person. Photograph: Chip Somodevilla/Getty Images

The impeachment investigation into president Donald Trump entered a new phase on Monday as House Democrats published full transcripts of the depositions given by two key witnesses.

The testimony of former ambassador to Ukraine, Marie Yovanovitch and former advisor to secretary of state Mike Pompeo, Michael McKinley, was released in full on Monday.

Both witnesses testified before the three committees leading the inquiry last month.

The release of the first batch of documents brings into the public domain new details relating to Mr Trump’s July 25th phone call with Ukrainian leader Volodymyr Zelenskiy and efforts by the administration to pressurise Ukraine to open investigations in exchange for aid – the focus of the impeachment investigation.

Ms Yovanovitch, who was recalled early to Washington in May, told investigators that she was taken aback when she discovered that she was mentioned several times during the July 25th phone call, and felt threatened by Mr Trump’s statement on that call that she was “going to go through some things”.

Mr McKinley also said that he was disturbed when he heard those words. He described Ms Yovanovitch as an “excellent, serious, committed” ambassador.

The Whistleblower gave false information & dealt with corrupt politician Schiff. He must be brought forward to testify. Written answers not acceptable! Where is the 2nd Whistleblower? He disappeared after I released the transcript. Does he even exist? Where is the informant? Con!

Ms Yovanovitch also testified that she was told by US ambassador to the European Union Gordon Sondland that she needed to tweet in support of Mr Trump, a request that she said she felt was beneath her office. Instead she suggested that Mr Pompeo issue a statement in support of her, to combat the smear campaign that was being conducted against her, though this never materialised.

She was also warned by a Ukrainian official to “watch her back” in regard to the president’s personal lawyer, Rudy Giuliani, the committees heard.

As the House committees prepared to release the testimonies of Mr Sondland and former special envoy to Ukraine Kurt Volker on Tuesday, Republicans criticised their committee colleagues for what they said was a selective release of transcripts. Representative Jim Jordan accused Democrats of “cherry-picking” which testimonies they release and when.

The release of the transcripts unfolded as the White House continued to stonewall Congress’s attempts to interview members of the Trump administration as part of their impeachment investigation.

Four White House officials who were subpoenaed to testify on Monday did not show up.

Among them was John Eisenberg, a lawyer on the National Security Council. His lawyers said that he had been directed by the White House not to testify, with the Trump administration citing constitutional immunity for those working for the president.

“Mr Eisenberg has no other option that is consistent with his legal and ethical obligations except to follow the direction of his client and employer, the President of the United States, ” his lawyer said in a statement.

Three other White House employees, including advisor to acting chief of staff Mick Mulvaney, Robert Blair, and two other officials, Michael Ellis and Brian Mc Cormack, also did not appear, despite the subpoenas.

As Mr Trump welcomed the Washington Nationals baseball team, which won the World Series last week to the White House on Monday, he continued his twitter attacks on the impeachment investigation. Amid reports that the whistleblower who started the impeachment inquiry will provide written testimony to the committees, Mr Trump said he should testify.

“The Whistleblower gave false information & dealt with corrupt politician Schiff. He must be brought forward to testify. Written answers not acceptable!”

Separately, the president suffered a legal setback on Monday when a court in Manhattan ordered that eight years of tax returns be submitted to investigators. The federal appeals court ruled that, because Mr Trump’s accountants had been ordered to turn over the documents, arguments from the Trump legal team about presidential privilege did not apply. Mr Trump is likely to appeal the ruling and the case could go to the US Supreme Court.