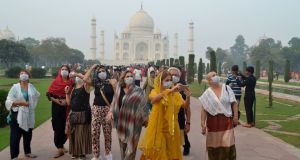 Over a million private cars were banned from plying the streets of India’s capital New Delhi on Monday as part of an 11-day experimental measure by the city’s government to reduce smog levels in the world’s most polluted city.

According to the official fiat issued last week by the Delhi state government, private cars with odd and even registration number plates will be allowed on city roads only on alternate days, until November 15th, as the capital’s air quality index exceeded 500.

In some crowded parts of Delhi this crossed the 1,000 mark over the weekend, some 20 times the permissible limit of 50 recommended by the World Health Organisation.

Medical specialists said such toxicity was the equivalent of smoking more than 50 non-filter cigarettes per day.

Such high levels expose city residents, especially children and the elderly, to respiratory and related problems, from deadly Particulate Matter (PM) 2.5 and PM 10 levels in the atmosphere.

These extremely fine particles – less than 2.5 and 10 micrometres in diameter – are linked to increased rates of chronic bronchitis, lung cancer and heart disease, as they penetrate deep inside people’s lungs and can pass into the bloodstream.

Delhi’s chief minister Arvind Kejriwal declared a public health emergency and ordered the closure of all city schools until Tuesday.

His administration has also begun distributing some five million face masks in what many locals consider to be a feeble bid to protect Delhi’s residents.

Low visibility due to high pollution levels also led to more than 30 flights being diverted from Delhi over the weekend, causing severe hardship to travellers. Dozens of road accidents were reported across the city by police, due to hazy conditions.

Delhi’s air quality generally worsens each year with the onset of winter, particularly after the annual Diwali festival of lights in late October or early November, when millions of people let off highly polluting crackers.

But the pollution is further exacerbated by farmers in the neighbouring states of Haryana and Punjab burning their crop stubble following their paddy harvest, ahead of planting wheat.

Furthermore, fine dust, sand and cement particles from construction sites, and the inexorable march of India’s western Thar Desert towards the capital due to excessive urbanisation and deforestation, also contributed to the overall pollution.

“The authorities seem helpless in combating pollution,” said Delhi resident Ashok Sharma. He said they appeared to be outsourcing the calamity to divine intervention by hoping that rain and wind from the northern Himalayas would mitigate the pollution.

Meanwhile, all major city landmarks remained enveloped in a haze, and many of Delhi’s more affluent residents have either fled to other less polluted places or cocooned themselves inside their homes with expensive air purifiers that are in short supply.

But tens of thousands of Delhi’s poor and homeless have no such option and remain sleeping on pavements in the contaminated open.

“While the good news is that there is a higher public awareness of the pollution crisis, the bad news is that it will take at least half a decade before any major improvement can be seen in Delhi’s air quality,” warned the Economic Times newspaper.

City authorities plan on banning eateries from using coal and wood fires, closing down cement and stone crushing plants and brick kilns and preventing diesel-fuelled trucks from entering the city in a bid to contain pollution.

But senior officials conceded that these were mere ad hoc measures and that political differences between the federal and Delhi state governments were only further aggravating the crisis.