Trump hits out at start of key week in impeachment inquiry 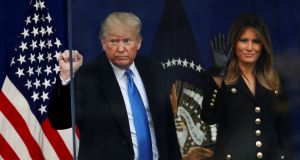 US president Donald Trump hit out at Democrats’ handling of the impeachment inquiry on Monday as Washington prepared for a critical week in the process.

On Wednesday two witnesses will appear publicly for the first time in televised hearings on Capitol Hill, with a third witness due to testify on Friday.

But Mr Trump accused Democrats, who have been gradually publishing written transcripts of interviews conducted privately since September, of releasing “doctored transcripts”.

“Republicans should put out their own transcripts!” he tweeted on Monday. “Schiff must testify as to why he MADE UP a statement from me, and read it to all!” he said, referring to House intelligence chairman Adam Schiff’s summary of the rough transcript released by the White House of Mr Trump’s phone call with Ukrainian president Volodymyr Zelensky on July 25th.

That call, during which Mr Trump asked for an investigation into Democratic rival Joe Biden and his son, Hunter, sparked a whistleblower complaint and has become the focus of the impeachment probe.

Mr Trump also said in a second Twitter post ahead of his appearance on Monday at a Veterans Day parade in New York that the impeachment process was a scam.

“It should be ended and the Whistleblower, his lawyer and Corrupt politician Schiff should be investigated for fraud!”

Two state department officials – Bill Taylor, the acting ambassador in Ukraine, and George Kent, deputy assistant secretary for European and Eurasian affairs – will testify publicly before the committees leading the impeachment inquiry on Wednesday. Former ambassador to Ukraine Marie Yovanovitch will be questioned on Friday.

Mr Trump has also suggested that the White House may release details of a phone call he had with Mr Zelensky on April 12th as early as Tuesday.

“They want to have a transcript of the other call, the second call, and I’m willing to provide that,” Mr Trump said at the weekend, referring to the phone call that took place shortly after Mr Zelensky’s election victory.

In a boost for Mr Trump, former ambassador to the United Nations Nikki Haley outlined her support for the president in a series of interviews to promote her new book in recent days.

Asked if she thought Congress would impeach Mr Trump, she replied: “No. On what? You’re going to impeach a president for asking for a favour that didn’t happen and giving money and it wasn’t withheld? I don’t know what you would impeach him on.”

In an interview with CBS she also compared impeachment to “the death penalty for public officials”.

Ms Haley was referring to Mr Trump’s request for his Ukrainian counterpart to undertake investigations. At that time the US was withholding promised military aid to the country, but the president has denied there was a quid pro quo.

Separately, New York congressman Pete King became the latest Republican to announce that he would not contest next year’s election. Mr King (75) has been a central figure in Irish America and is co-chairman of the Friends of Ireland caucus on Capitol Hill.

Mr King, who has represented a Long Island district for more than a quarter of a century, said he was making the decision to spend more time with his family.