Dutch trade union movement in a spiral of decline 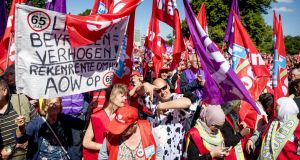 What are trade unions for? What are we actually for? If those are not the questions being asked in the executive offices of the Netherlands’ largest union, the FNV, as the year comes to an end, then they’re certainly on the lips of anyone watching their slow, steady and relentless decline.

On the other hand, the decline of Dutch trade unions is nothing new. It’s been going on since the 1980s. They even know what the problem is, though apparently that doesn’t help. They’ve been failing to make any connection at all with younger workers, particularly those under 25.

As a result, a whole new generation has joined the workforce of indigenous and overseas companies and they have no idea what trade unions are for, know nothing about them in terms of sectoral representation, have never been approached by one, and, rightly or wrongly, couldn’t care less.

It’s a real shame – but not one apparently capable of galvanising well-paid union leaders into action.

Government and employers will be watching this decline with interest, of course, given that the Netherlands still has social partnership and collective bargaining, and that the unions – for as long as they merit it – have a privileged position on the country’s advisory Social and Economic Council.

They’ll know that when the public starts to chortle at a problem rather than greeting it with dismay – as should be the case when an important strand of a country’s social fabric is being lost – something fundamental is changing. Sympathy has run out.

There were two particular rounds of chortling at the FNV this year, the union’s annus horribilis.

The first was in April when – with the economy booming and unemployment at just 3.3 per cent, its lowest since the global financial meltdown in 2008 – the union was forced to cut 20 per cent of its workforce in a predictably desperate and long overdue bid to save €16 million a year.

It was living beyond its means, feather-bedding its elite, and failing to attract new members. Gosh, who’d have thought, came the amused response!

The second unwelcome milestone in 2019 came the other day when a new survey by the Central Statistics Bureau (CBS) revealed that membership of the FNV has fallen below one million for the first time since 1988 – a smarting psychological blow which cannot be underestimated.

Amusing why? Because, for as long as anyone can remember, the FNV – an amalgam of 19 unions, formed in 1976 in an effort, ironically, to stave off individual decline – has been defiantly insisting it has “1.1 million members”. Now, we all know officially what we all knew anyway: that it hasn’t.

The CBS report, one might think, would be certain to have an impact, except that no amount of insightful analysis or excoriating criticism has managed in the past to deflect the inexorable downward trend for all the unions, not just the FNV.

The CBS report was more of the same. Between 2017 and 2019, the union movement lost 101,000 members, a decrease of 6 per cent, it said. This was the fourth-largest fall since membership began being measured in 1901.

The decrease was largest among – you guessed it – young workers under 25. Between 2009 and 2019, the number of members in that bracket fell by 30 per cent.

The number of male union members has dropped by 618,000 so far this year alone.

There was bad news too when it came to women. Their membership has bucked the trend by showing increases in recent years. However, between 2017 and 2019, it now transpires, women switched to abandoning ship as well, with numbers down 6 per cent over the two years.

Most dismaying of all perhaps is that 13 per cent of their own members believe that unions have no influence on their working conditions – while 8 per cent believe they fail to stand up for workers’ interests when it comes to the crunch.

Infighting has played its part in the disillusionment too, particularly a row over pensions that almost split the FNV in 2012 and changed everything organisationally – except its declining membership.

Others say that disillusionment had its roots in the Wassenaar Agreement in 1982, when unions committed to restrain wage demands in return for better employment prospects and curbs on inflation – a deal inevitably seen as a sell-out.

All that, of course, is ancient history. The problem for the unions is that they seem frozen in the midst of it, muttering: “Bit economy? What bit economy?”