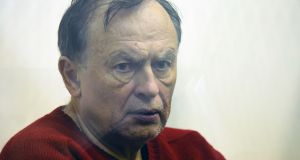 A Russian court on Monday charged a distinguished historian known for re-enacting Napoleonic battle scenes with the murder of his partner after he was found in a river with a rucksack containing her severed arms.

Mr Sokolov told the court he had loved Ms Yeshchenko and that they had been lovers for five years. But they argued over his children from another relationship and he had “lost control,” shooting her four times with a sawn-off rifle, he said.

“I repent,” he was quoted as saying by the Interfax news agency.

Investigators suspect Mr Sokolov, whose expertise on Napoleon Bonaparte earned him a Legion of Honour order of merit from France, of chopping his partner into pieces and of trying to dump them in the river to cover his tracks.

He was hauled from the Moyka River on Saturday morning with a rucksack containing a gun that fires rubber bullets and the dismembered arms of a woman, Russia’s investigative committee, which handles major crimes, said in a statement.

He was treated for hypothermia.

Mr Sokolov appeared in court on Monday and was visibly upset, occasionally holding his head in his hands as he spoke to his lawyer.

Sokolov’s lawyer Alexander Pochuyev said his client had probably been sober during the murder.

The court ruled to hold Mr Sokolov in pre-trial custody for two months.–Reuters