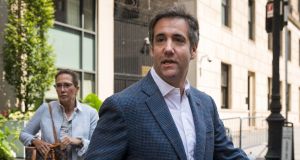 US president Donald Trump hit out at his one-time lawyer Michael Cohen on Friday, insisting that he did not know in advance of a controversial meeting between members of his campaign team and Russian individuals in June 2016.

CNN reported that Mr Cohen, who is being questioned by the FBI, has said he was at a meeting where Mr Trump was told of the proposed meeting in Trump Tower on June 9th, 2016 and authorised the meeting to proceed.

The development came as the US president celebrated better-than-expected GDP figures on Friday.

In a huge boost to the president and Republicans ahead of November’s midterm elections, new figures showed that the US economy grew at its fastest rate in four years in the second quarter of this year. The economy grew at an annual rate of 4.1 per cent between April and June, compared with just 2.2 per cent in the first quarter.

Mr Trump held an impromptu press conference at the White House in which he lauded the “amazing growth” levels.

Arrived back in Washington last night from a very emotional reopening of a major U.S. Steel plant in Granite City, Illinois, only to be greeted with the ridiculous news that the highly conflicted Robert Mueller and his gang of 13 Angry Democrats obviously cannot find Collusion...

....,the only Collusion with Russia was with the Democrats, so now they are looking at my Tweets (along with 53 million other people) - the rigged Witch Hunt continues! How stupid and unfair to our Country....And so the Fake News doesn’t waste my time with dumb questions, NO,....

.....I did NOT know of the meeting with my son, Don jr. Sounds to me like someone is trying to make up stories in order to get himself out of an unrelated jam (Taxi cabs maybe?). He even retained Bill and Crooked Hillary’s lawyer. Gee, I wonder if they helped him make the choice!

“We’re going to go a lot higher than these numbers.  And these are great numbers,” Mr Trump said. “If economic growth continues at this pace, the United States economy will double in size more than 10 years faster than it would have under either President Bush or President Obama.”

Some economists, however, predicted slower growth in the third and fourth quarter of this year, pointing out that it could reflect a short-term stimulus from the trillion-dollar tax cut plan introduced earlier this year.

The figures are welcome news for Mr Trump, who has been battling critics from both outside and within his own party over his handling of a meeting with Russian president Putin last week, and his actions on trade which prompted the administration to agree to a $12 billion package for farmers this week.

Allegations that Mr Trump knew about the controversial meeting in Trump Tower in June 2016 could spell trouble for the US president. Both Donald Trump jnr and Jared Kushner have insisted that the president did not know about the meeting which his son attended on the pretext of receiving incriminating information about his father’s presidential rival Hillary Clinton.

But Mr Trump denied all knowledge of the meeting in tweets on Friday.

“I did NOT know of the meeting with my son, Don jr. Sounds to me like someone is trying to make up stories in order to get himself out of an unrelated jam (Taxi cabs maybe?),” he said, an apparent reference to Mr Cohen’s involvement in the management of taxi companies, which US media have reported is a subject of interest for the FBI.

Mr Trump added: “He even retained Bill and Crooked Hillary’s lawyer. Gee, I wonder if they helped him make the choice!” The president appeared to be referring to Lanny Davis, a lawyer who was once counsel to Bill Clinton, and has now been retained by Mr Cohen.

Mr Giuliani hit out at Mr Cohen on Thursday, branding him “a pathological liar”.

“I don’t see how he’s got any credibility,” he told CNN after the story broke. The network reported that Mr Cohen does not have any evidence that Mr Trump knew of the meeting, but is willing to testify that he did.