Other international partners to Iran nuclear agreement should insist on maintaining it, even while holding out possibility of making it more effective 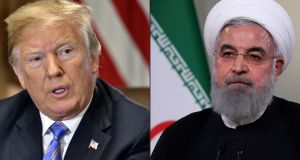 ‘The unconditional support of Donald Trump (left) for Israel and for Saudi Arabia’s campaign against Iran plays into this dangerous and destabilising political and diplomatic game.’ Above right, Iranian president Hassan Rouhani. Photographs: AFP/Ho/Nicholas Kaam/Iranian presidency

Bellicose exchanges between US and Iranian leaders this week warning of the dire consequences of war between them add another danger to the destabilising conflicts in the Middle East. Coming as President Donald Trump’s unilateral withdrawal from the Iranian nuclear deal bites home with renewed US sanctions and as the war in Syria draws to a close, the exchanges raise the question of whether he wants to see regime change there, force Iran back to the negotiating table or is drawing attention away from domestic concerns over his campaign links with Russia.

Trump has consistently argued against the agreement reached with Iran in 2015 by the five permanent members of the United Nations Security Council, plus the European Union and Germany. He says it fails to guarantee Iran will not develop nuclear weapons and is heavily lopsided in favour of that state. Since he announced the decision last May, Trump has consolidated his advisory team with notoriously hawkish figures, including national security adviser John Bolton and secretary of state Mike Pompeo. Bolton has long advocated regime change in Iran through US military intervention, while Pompeo has just denounced the Iranian leadership as a kleptocracy.

Unsurprisingly, the Iranians have responded with similar rhetoric warning the US off any thought of war. They would close off Gulf oil exports, spread instability throughout the region and fight to the last soldier. In Washington, Iranian experts warn how costly a war would be for the US, the global economy and of the danger that other powers like Russia would be sucked into such a conflict. They note how cautious Trump has been in practice about foreign intervention.

That leads many to believe his real purpose is to force Iran back into negotiations. Its own economy is in difficulty as social expectations of greater prosperity from a more open economy are dashed. Regime hardliners are strengthened in the patriotic wave, reinforcing the large budget devoted to the Iran expeditionary force in Syria and its aid to Hizbullah fighters there with troops near the Israeli border. Trump’s unconditional support for Israel and for Saudi Arabia’s campaign against Iran plays into this dangerous and destabilising political and diplomatic game.

The other international partners to the Iran nuclear agreement should insist on maintaining it, even while holding out the possibility of making it more effective. US sanctions are forcing European companies to choose between Iranian and US partners. The EU has strongly defended the deal and is preparing a response to US actions. The Juncker-Trump talks on trade sanctions, which have just agreed on reciprocal measures and further detailed negotiations, open the possibility of a similar transatlantic engagement on Iran. That is a way to avoid a dangerous unravelling of peace and security in the Middle East.