America Letter: After a half-baked clarification, network was back trumpeting US leader 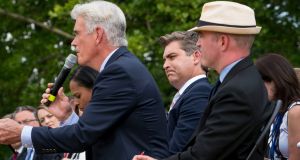 This week may have been one of the most difficult of Donald Trump’s presidency as the White House struggled to contain the political fallout from his astonishing press conference in Helsinki with Vladimir Putin. But the Trump administration was not the only one feeling the heat.

It was also a challenging week for Fox News, the president’s cable news channel of choice and one of the most powerful media platforms in America.

Trump’s close relationship with the network is well-known. It was an early backer of the property mogul when he announced his unlikely run for the presidency in 2016, giving him an outlet when many other media channels resisted taking him seriously.

That bet paid off. As the Trump presidency became a reality, Fox News’s political instincts were proved right. In the past 18 months, the network has become a cheerleader for the president, a strident pro-Trump voice in a sea of media disdain for him as he lurches from one crisis to another.

As Trump has settled in to his role as the 45th president of the United States, a symbiotic relationship between the resident of the West Wing and America’s most-watched cable news channel has emerged.

Trump regularly tweets about Fox & Friends, his regular morning TV viewing, from the White House, resulting in a kind of bizarre real-time back-and-forth played out through social media.

The question of who is really determining US policy is now a valid issue – Trump has frequently made pronouncements on Twitter shortly after something similar has been said on the network. Earlier this month, he erroneously tweeted that former president Barack Obama had granted citizenship to thousands of Iranians, after the assertion was made on Fox News. On another occasion he pledged to tackle crime in Chicago following a report on the issue on the channel.

But the relationship works both ways. The network is the jewel in the crown of Rupert Murdoch’s Fox empire. Fox News has the highest ratings of any news channel in the United States, beating rivals CNN and MSNBC.

This week that relationship hit a stumbling block, with the disastrous performance of Trump following his much-awaited summit with Putin.

As the 45-minute press conference drew to a close, there was something of a lull in the sphere of conservative commentary in the United States as commentators and Republican politicians digested what had just played out in Helsinki and waited to see what way the wind would blow.

In the immediate aftermath of the press conference, Fox News cut to a segment discussing the upcoming Senate appearance of Lisa Page, a former FBI lawyer who sent anti-Trump text messages, as the rest of the global media world dived into analysis of the most extraordinary news event of modern times.

But within hours the network was scrambling to keep up with the news agenda. As Republicans came out one by one to denounce Trump, Fox News followed suit, with many of its commentators questioning the president’s judgment.

Complicating matters for the network was the fact that Trump had promised an interview with not one but two Fox hosts immediately after the summit – in keeping with his decision last week at his press conference with Theresa May to take a question from the Fox News correspondent over CNN.

While prime time hosts Sean Hannity and Tucker Carlson were granted interviews with the president in Helsinki – in normal circumstances a coup for news correspondents – the fact that the interviews took place immediately after the press conference, before the full gravity of the president’s disastrous performance had played out, caused problems for the station.

By the time the interviews aired in the US, the negative reaction to the president’s interview had firmly taken root, and the interviews seemed strangely drab and out of date.

Nonetheless, while Fox News found itself at sea as its main ratings-getter, Donald Trump, went off script in Helsinki, within a few days order had been restored and the network was back in comfortable territory.

Trump’s half-baked clarification on Tuesday that he had in fact mis-spoken in Helsinki may not have convinced most people, but it was enough for Fox News. On Tuesday, top Trump backer Hannity was back on his soapbox. “The president is cleaning up Obama’s mess,” he intoned, as he denounced the “hysteria from those who want the president to fail”.

Trump’s meeting with Putin may be occupying the liberal media, he said, but the real question remained – “Where are those 33,000 Hillary Clinton emails?”  Trump could not have said it better himself.