Doctors dismiss US president’s comments as ‘irresponsible and dangerous’ 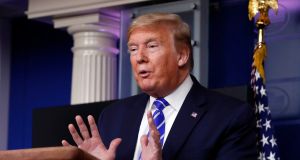 US president Donald Trump speaks about the coronavirus at the White House on Thursday. Photograph: AP

US president Donald Trump has claimed he was being sarcastic and testing the media when he raised the idea that injecting disinfectant or irradiating the body with ultraviolet light might kill the coronavirus.

Mr Trump said at a Thursday news briefing that scientists should explore whether inserting light or disinfectant into the bodies of coronavirus patients might help treat the respiratory illness caused by the virus.

At an Oval Office event on Friday, he sought to walk back those comments while also seeming to continue to advance his theory that disinfectants and sunlight might ultimately help within the body.

“I was asking a question sarcastically to reporters like you just to see what would happen,” he told journalists.

His remarks on Thursday, directed at doctors in the room on his coronavirus task force, did not come across as sarcasm.

Pressed repeatedly about the issue on Friday, Mr Trump said he was not encouraging people to ingest disinfectant.

Health professionals have been encouraging people for some time to wash their hands thoroughly with soap or to use hand sanitiser to help stop the spread of the virus.

“I do think that disinfectant on the hands could have a very good effect,” he said.

“Sun and heat, and humidity wipe it out. And this is from tests - they’ve been doing these tests for ... a number of months. And the result - so then I said, ?Well, how do we do it inside the body or even outside the body with the hands and disinfectant I think would work.’”

Reporter: Some doctors want you to clarify that you weren't telling people to inject disinfectant into their veins.

Trump: I was being sarcastic, obviously, based on the way the question was asked. I was looking at you.

Reporter: I wasn't there.

Mr Trump’s initial comments about the issue raised concerns that anxious people might poison themselves to try to fight the virus, prompting an international chorus of doctors and health experts to urge people not to drink or inject disinfectant.

Dr Vin Gupta, a lung specialist, told NBC News: “This notion of injecting or ingesting any type of cleansing product into the body is irresponsible and it’s dangerous. It’s a common method that people utilise when they want to kill themselves.”

Linda Bauld, professor of public health at the University of Edinburgh, said: “There could be quite serious adverse consequences from what Mr Trump said. Disinfectants are meant to kill outside the body.”

John Balmes, a pulmonologist at Zuckerberg San Francisco General Hospital and a professor of medicine at the University of California, San Francisco, told Bloomberg: “The airway and lungs are not made to be exposed to even an aerosol of disinfectant.”

“Not even a low dilution of bleach or isopropyl alcohol is safe,” said Dr Balmes. “It’s a totally ridiculous concept.”

Dr Deborah Birx, head of Mr Trump’s Covid-19 task force, looked on as the president made his remarks at a White House press briefing, after hearing evidence of the way the virus behaves outside the body at different temperatures, climates and surfaces.

Later in the briefing he asked Dr Birx if she had heard of sunlight treating viral disease. “Not as a treatment,” Dr Birx replied. “I mean, certainly, fever is a good thing when you have a fever. It helps your body respond. But not as….”

“I think that’s a great thing to look at,” Mr Trump interrupted.

The president has previously infuriated the medical community by extolling the merits of hydroxychloroquine, a malaria treatment, as a potential Covid-19 drug. Clinical trials have so far shown no evidence that it is effective against coronavirus.

Disinfectant manufacturer Reckitt Benckiser put out a statement on Friday: “Due to recent speculation and social media activity, RB (the makers of Lysol and Dettol) has been asked whether internal administration of disinfectants may be appropriate for investigation or use as a treatment for coronavirus (Sars-CoV-2).”

“We must be clear that under no circumstance should our disinfectant products be administered into the human body (through injection, ingestion or any other route),” the UK-based company said. “As with all products, our disinfectant and hygiene products should only be used as intended and in line with usage guidelines.”

The White House said on Friday that Mr Trump’s comments had been taken out of context and that he had urged people to seek coronavirus treatment only after conferring with their doctors.

White House Press Secretary Kayleigh McEnany said in a statement, “President Trump has repeatedly said that Americans should consult with medical doctors regarding coronavirus treatment, a point that he emphasised again during yesterday’s briefing.”

The emailed statement did not directly mention cleaners or ultraviolet (UV) light as coronavirus treatments, but its subject was “White House on disinfectant.” – Reuters/The Financial Times Limited 2020