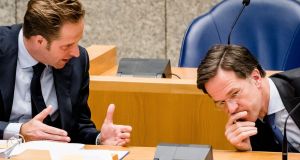 The Dutch government has abandoned its initial attempt to commission a Covid-19 contact tracing app after the final seven designs were dismissed as inadequate on privacy grounds.

The mobile app was planned as part of the Netherlands’ exit strategy from coronavirus lockdown. With primary schools to re-open from May 11th, health minister Hugo de Jonge pledged on Thursday to appoint a new team immediately to oversee the development of the app, and said he would make no concessions on protecting privacy.

The latest statistics show 4,177 registered deaths in the Netherlands as a result of the virus, though taking nursing homes into account could see that figure almost double. Even so, both hospital admissions and fatalities are showing a steady decrease, according to the public health institute.

Both Mr de Jonge and prime minister Mark Rutte have said they aim to use two complementary apps that together would play a key role in identifying remaining coronavirus hotspots and allowing targeted interventions when the lockdown eventually eases.

The more basic of those apps – developed by Amsterdam hospital OLVG– is already available and allows users to enter medical data and personal observations that will prompt a call from a doctor if they appear worrying.

The second app – which is proving more contentious to develop – would establish Bluetooth connections to other phones. Where any user of the app became infected, it would then be possible to trace anyone who had been in the user’s vicinity to carry out testing and manage the outbreak.

Both China and South Korea successfully used smartphone apps to monitor patients with the disease and to track their contacts, but in the West concerns about privacy and data collection by governments are highly sensitive politically.

Just a week ago, nine IT experts who had been part of the government’s assessment panel for the initial 63 proposed apps signed an open letter saying they were withdrawing because the criteria were unclear, the process was flawed, and user anonymity was not necessarily assured.

Having seen the process from the inside, they came out in support of 140 academics who warned recently that deploying the apps without proper safeguards or acknowledgment of new European Commission guidelines risked setting a precedent for post-coronavirus usage.

In the case of one app, its source code allegedly included links to the personal details of 200 users of another app.

The government’s problems became even more acute last weekend when attorney general Reimer Veldhuis was asked to assess the final seven contenders for compliance with privacy laws – and found all seven lacking.

The government says it is hoping the final apps will be used voluntarily, but has not ruled out making them compulsory if necessary to ensure the required 60 per cent penetration.