Coronavirus: ‘If it was today we wouldn’t be lifting restrictions’, Holohan warns

An Taoiseach Leo Varadkar has told the Dáil that the easing of Covid-19 public health measures "will be gradual" and may not mirror the manner in which they were introduced. Video: Oireachtas TV 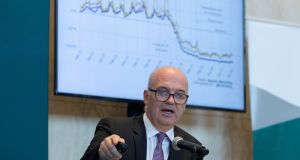 Public health officials have said there is no certainty restrictions will be relaxed next month, despite a range of positive data indicating “significant suppression” in growth of the Covid-19 virus.

Speaking last night, chief medical officer Dr Tony Holohan warned against complacency and pointed to data from mobile phones and seismic sensors that suggested an increase in activity, or a “slippage” in compliance.

Dr Holohan said he understood the public’s frustration, but “it would take very little indeed for us to lose the good work we have done”.

He said while people may feel Ireland is on “a pathway towards the slackening of measures on May 5th, that is not the case. If the decision was to be made today, we wouldn’t be advising any of the restrictions in place be relaxed,” he said.

“It’s really important that people don’t anticipate that’s what’s going to happen on May 5th. It is not a certainty that this is the position we’ll be in.”

The data we received this afternoon shows an increase in patterns of driving, walking and transit among those who use Apple devices in recent days.

However, we also know from @TIITraffic that car traffic along the national road network is a fraction of what it normally is. pic.twitter.com/85T6v2QlPs

He was speaking as he reported the deaths of another 28 people who had been diagnosed with Covid-19, alongside a significant spike in diagnosed cases of 936. This brought the laboratory-confirmed death toll to 794 and the number of confirmed cases to 17,607.

Data from the Department of Health indicates the spread of the disease has slowed across a variety of measures. Prof Philip Nolan, chairman of the National Public Health Emergency Team’s (NPHET) epidemiological modelling group, said there had been a “very significant suppression of the growth of Covid-19 . . . in Ireland monitored against all the different indicators you might use”.

The reproduction rate of the virus, the so-called R0 number, is somewhere between 0.5 and 0.8, meaning that on average every infected person is passing the virus on to less than one other person.

However, discussing the potential growth of that metric if measures were relaxed, he said an R number of 1.6 would see “a dangerous peak in cases, perhaps up to 1,000 a week”.

Meanwhile, stricter measures are expected for passengers arriving into the State. Travellers would be checked to ensure they would self-isolate under new measures to be announced shortly, Minister for Health Simon Harris told the Dáil on Thursday. It would involve “more than just taking a person at their word that they are following the isolation restrictions”, he said.

The Dáil was also told the Leaving Cert exams would start on July 29th. However, Minister for Education Joe McHugh said the Government was considering all contingencies, including predictive assessment.

Earlier, Opposition party leaders criticised the Government over what they have claimed is a lack of transparency, and raised questions about who is in control of decision-making.

Labour leader Alan Kelly questioned the make-up of the NPHET, which he said had grown substantially since it was convened in January, with 11 sub-groups. He asked if the Government had approved this: “ Who is NPHET accountable to? Who makes the final decisions?”

Fianna Fáil leader Micheál Martin said there had been “too often a sense of a resistance to being upfront about problems until the solution has been found”.