Trump calls Putin to congratulate him on election win 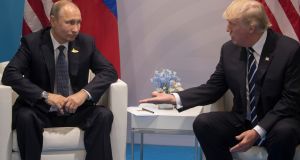 US president Donald Trump has called his Russian counterpart Vladimir Putin to congratulate him on his landslide victory in Sunday’s election, breaking a taboo among western leaders in appearing to endorse Mr Putin’s re-election to a fourth term in power.

Speaking at the White House, Mr Trump confirmed he had called Mr Putin to “congratulate him on his electoral victory”, and said the two would “probably get together in the not too distant future so that we can discuss the arms race”.

The Kremlin confirmed the call, saying the two leaders discussed joint measures to fight terrorism and “co-ordinated efforts to avoid an arms race”.

But they did not discuss the poisoning of Sergei Skripal, the former double agent targeted with a nerve agent in the UK, the Kremlin told the Interfax news agency on Tuesday.

“Special attention was paid to the working through the question of holding a possible meeting at a high level,” the Kremlin said.

Any meeting between the two leaders would be controversial, given the ongoing investigations into whether the Trump campaign colluded with Russia during the 2016 elections.

The phone call was made just days after the United States imposed sanctions against 19 Russian nationals and five entities over Russian interference in the US presidential election.

Those sanctioned included a wealthy businessman nicknamed “Putin’s chef” and the Internet Research Agency, a producer of politically charged online content which has gained notoriety as a “troll factory” .

Western leaders had avoided offering direct congratulations to Mr Putin to avoid legitimising Sunday’s election. The Organisation for Security and Co-operation in Europe, which monitored the election, said it was well administered but had a “lack of genuine competition”.

The UK was also angry over the recent use of a nerve agent first developed in the Soviet Union in the recent attack on Mr Skripal and his daughter, Yulia.

Other western leaders have called Mr Putin following the Russian election, including the German chancellor, Angela Merkel, and President Emmanuel Macron of France. But both avoided explicitly using the words “congratulated”. Instead both “wished success” to Mr Putin for his new, six-year term in office.

Speaking to reporters in the Oval Office, Mr Trump said the two leaders would probably discuss the “arms race which is getting out of control. We will never allow anybody to have anything close to what we have.”

Talk of an “arms race” has increased since Mr Putin held a blood-pumping state of the union address this month, where he showed off Russia’s newest nuclear weapons , blaming the United States for leaving the anti-ballistic missile treaty, and telling his audience: “They didn’t listen to us then. Listen to us now.”

Mr Putin’s speech appeared to be a response to Mr Trump’s new nuclear posture review, which sought the expansion of US low-yield nuclear weapons.

During the call, the two leaders also discussed the North Korean crisis, with the Kremlin saying it was satisfied with the recent reduction in tensions on the peninsula. – Guardian

1 Parents jailed over female genital mutilation of daughter
2 The notorious Donald John Trump goes on trial
3 Gardaí may have to wait days to interview mother of McGinley children
4 McDonald and SF candidates sign pledge to be guided by ard chomhairle
5 Border on Brexit: ‘Europe will look after Northern Ireland’s interests’
Real news has value SUBSCRIBE