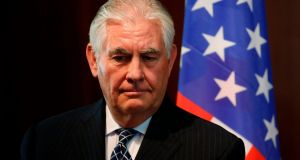 Rex Tillerson’s sacking is the latest in a series of notable firings and resignations from president Donald Trump’s White House since he took office on January 20th, 2017.

Tillerson and Trump had been at odds over several aspects of foreign policy during his 13 months in the role.

The former Goldman Sachs executive had been a key player in the Trump administration from the outset. He had clashed with Trump over the plans to place tariffs of 25 per cent on steel imports

The 29-year-old former model left to pursue “other opportunities” according to the US president.

The White House aide who had been in a romantic relationship with Hicks was forced to resign amid allegations of domestic abuse made by his ex-wife.

Trump’s former campaign manager known for his right-wing views was fired as the president came under for his response to white supremacist violence in Charlottesville, Virginia.

The former Wall Street financier was fired just 10 days after effectively replacing Spicer after calling a reporter to give a profanity-laced tirade against his own colleagues.

Priebus’s departure came in the wake of published comments by Scaramucci. He had urged a reporter to call Priebus a “paranoid schizophrenic”.

Spicer resigned after being replaced by Scaramucci. He had endured a difficult relationship with the media following a disagreement over the size of the crowd at the president’s inauguration.

Comey’s sacking came days after he testified on Capitol Hill about the FBI’s investigation into Russia’s election-meddling and possible connections between Russia and Trump’s campaign.

Flynn was axed after he was found to have lied about his contacts with Russian ambassador Sergey Kislyak. He later pleaded guilty to lying to the FBI.

1 Varadkar promises ‘early retirement pension’ amid backlash over gap
2 Search for missing remains of Mulready-Woods (17) continues
3 Boris Johnson wishes Harry and Meghan ‘very best for future’
4 RTÉ will not include Sinn Féin in second TV debate despite legal threat
5 Election 2020: How much of an impact will the environment have?
Real news has value SUBSCRIBE