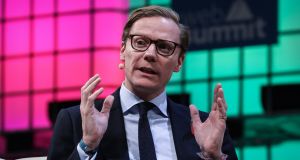 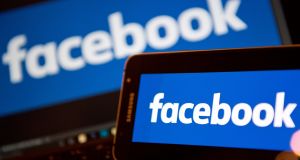 The Data Protection Commissioner in Ireland is spekaing to Facebook Ireland about issues relating to oversight of third parties who access its users’ data. Photograph: Getty

The Government has said that it will table an amendment to data protection legislation currently going through the Seanad which would prevent Ireland becoming a hub for interference in other countries’ elections.

The Government’s decision, prompted by growing concerns over online political interference and the further escalation of the controversy engulfing Facebook, follows a discussion of the issue at Cabinet on Tuesday.

It comes as Cambridge Analytica, the UK-based political advertising firm at the centre of controversy over the use of Facebook user data, suspended its chief executive officer.

The board of the company said it it suspended CEO Alexander Nix pending an independent investigation into his comments and other allegations surrounding the firm.

British MPs have summoned Mark Zuckerberg to appear before a select committee investigating fake news and accused his company of misleading them at a previous hearing.

The Facebook founder has been called to give evidence to the digital, culture, media and sport committee, following revelations over the use of its data by the election consultancy Cambridge Analytica.

At yesterday’s Cabinet meeting ministers discussed the Facebook revelations, while the Taoiseach, who was visiting Berlin, expressed concerns that future referendums on Europe could be interfered with by foreign interests.

Last night the Government said that it would table an amendment to data protection legislation currently going through the Seanad.

“There are no grounds on which this State could become a hub for the processing of political opinion data in respect of elections or electoral activity taking place in other countries, the Department of Justice said in a statement.

However the legislation will retain a provision making it lawful to process “personal data revealing political opinions” once the activity is carried out by a political party, a candidate, or the Referendum Commission.

The amendment, which will be tabled in the Seanad on Thursday, was published on Tuesday night.

Cambridge Analytica, which worked on behalf of Donald Trump’s 2016 US presidential campaign, has been under fire in recent days following reports that it improperly harvested data from Facebook user files, and then failed to destroy that information when confronted.

Nix was also the target of a four-month-long undercover operation by Channel 4 News, which is airing video of his comments this week.

In a letter to Mr Zuckerberg, the select committee’s chair, Damian Collins, wrote that Facebook had been repeatedly asked about how companies acquired and held on to user data from its site, and whether data had been taken without their consent.

“Your officials’ answers have consistently understated this risk, and have been misleading to the committee,” he wrote. “It is now time to hear from a senior Facebook executive with the sufficient authority to give an accurate account of this catastrophic failure of process ... Given your commitment at the start of the New Year to “fixing” Facebook, I hope that this representative will be you.”

Meanwhile, Bloomberg has reported that the US Federal Trade Commission is to look at whether Facebook violated an agreement over its use of consumers’ personal data. The agreement was reached in 2011 following previous concerns about its handling of privacy issues.

In Ireland, the Data Protection Commissioner is “following up” with Facebook Ireland on issues relating to oversight of third parties who access its users’ data, following reports of alleged misuse of personal data by behavioural targeting firm Cambridge Analytica in the US.

In its first formal statement since reports at the weekend about the harvesting of the personal data of tens of millions of people in 2014, the commissioner said the issues reported by The Observer/The Guardian in relation to profiling of Facebook users affected substantially US Facebook users.

Britain is investigating whether Facebook did enough to protect data after a whistleblower said a London-based political consultancy hired by Donald Trump improperly accessed information on 50 million Facebook users to sway public opinion.

Elizabeth Denham, the head of Britain’s Information Commission, is seeking a warrant to search the offices of Cambridge Analytica after a whistleblower revealed it had harvested the private information of millions of people to support Trump’s 2016 US presidential campaign.

In a statement on Tuesday Ireland’s data commissioner said: “The issue of “friends” data being harvested when a Facebook user engaged with an app on Facebook was resolved by Facebook in May 2014 when access to friends’ data was restricted by a platform upgrade.”

“This followed a 2012 recommendation by DPC Ireland on foot of its re-audit of Facebook Ireland in relation to access to friends’ data.”

The commissioner said the issue of purported misuse of data by the companies; Strategic Communication Laboratories, GSR and Cambridge Analytica was incorporated into the UK Information Commissioner’s current investigation of political influencing.

“The Irish DPC is following up with Facebook Ireland in relation to what forms of active oversight of app developers and third parties that utilise their platform is in place with a view to ensuring it is effective,” the commissioner’s office said.

“In the absence of laws specifically regulating such political targeting online, the Irish DPC intends to issue guidance to users in terms of how they can trace why they are receiving certain advertisements and stories on social media, how they can mute or turn off receiving advertisements from those sources and how they can amend their ad preferences to control the types of ads they are served.”

The Data Protection Commissioner in Ireland is effectively the regulator for Facebook’s operations in Europe.

The controversy has hit Facebook shares which closed down nearly 7 per cent on Monday, wiping nearly $40 billion off its market value as investors worried that damage to the reputation of the world’s largest social media network would deter users and advertisers.

In Washington, the Republican chairman of the Senate Commerce, Science and Transportation Committee sent a letter on Monday to Facebook chief executive Mark Zuckerberg requesting information and a briefing on the Facebook user data.

Under a 2011 settlement, Facebook agreed to get user consent for certain changes to privacy settings as part of a settlement of federal charges that it deceived consumers and forced them to share more personal information than they intended.

That complaint arose after the company changed some user settings without notifying its customers, according to an FTC statement at the time.

An FTC spokeswoman did not immediately respond to a request for comment on Tuesday.

Created in 2013, Cambridge Analytica markets itself as a source of consumer research, targeted advertising and other data-related services to both political and corporate clients.

Facebook has said the data were harvested by a British academic, Aleksandr Kogan, who created an app on the platform that was downloaded by 270,000 people, providing access not only to their own personal data but also their friends’.

Facebook said Mr Kogan then violated its policies by passing the data to Cambridge Analytica. Facebook has since suspended both the consulting firm and SCL (Strategic Communication Laboratories), a government and military contractor.

Facebook said it had been told that the data were destroyed.

Mr Kogan says he changed the terms and conditions of his personality-test app on Facebook from academic to commercial part way through the project, according to an email to Cambridge University colleagues obtained and cited by CNN.

Mr Kogan says Facebook made no objection, but Facebook says it was not informed of the change, CNN reported.

The Channel 4 News investigation, broadcast on Monday, comes two days after the Observer reported Cambridge Analytica had gained unauthorised access to tens of millions of Facebook profiles in one of the social media company’s biggest data breaches.

On Monday, Mr Nix said the media attacks were because of his firm’s role in the successful presidential election campaign of Donald Trump.

Mr Nix, one of the CA executives targeted by the undercover Channel 4 reporters, suggested he could use women to entrap politicians on behalf of their rivals.

“Deep digging is interesting, but you know equally effective can be just to go and speak to the incumbents and to offer them a deal that’s too good to be true, and make sure that that’s video recorded.

Mr Nix said they could “send some girls around to the candidate’s house”, adding that Ukrainian girls “are very beautiful, I find that works very well”, Channel 4 reported.

Mr Nix told BBC’s Newsnight the sting was “a co-ordinated attack by the media that’s been going on for very, very many months”.

He added, however, that he had a “huge amount of regrets about the fact that we, maybe, undertook this meeting and spoke with a certain amount of hyperbole about some of the things that we do”. - Additional reporting PA/Guardian/ Bloomberg