Tillerson firing raises fear of shift in US foreign policy

After replacing US secretary of state Rex Tillerson with CIA director Mike Pompeo, US president Donald Trump said on Tuesday that he and Tillerson had a different mindset on certain policies including the Iran nuclear deal. Video: Reuters 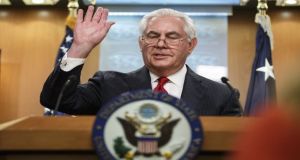 US secretary of state Rex Tillerson waves goodbye after an emotional news conference following the announcement of his sacking by US president Donald Trump. Photograph: Andrew Harnik/AP

The turmoil within the Trump administration intensified on Tuesday as the US president fired his secretary of state, raising fears among allies about a possible shift in US foreign policy.

Donald Trump announced on Twitter that Rex Tillerson, who has held the post for 14 months, would be replaced by Mike Pompeo, the head of the CIA and a close Trump ally.

The president did not inform Mr Tillerson directly of the decision before the announcement, instead phoning the former ExxonMobil chief executive three hours later to tell him.

However, it is understood that Mr Tillerson was warned by senior administration officials last Friday that his position was in jeopardy, prompting his surprise decision to cut short a trip to Africa and return to Washington.

Confirming the decision as he departed for California, where he was due to inspect prototypes of the proposed border wall with Mexico, Mr Trump said that the two men had many differences, including on Iran.

“We got along actually quite well, but we disagreed on things,” he said in an impromptu news conference on the White House lawn. “When you look at the Iran deal: I think it’s terrible, I guess he thought it was okay. I wanted to either break it or do something and he felt a little bit differently. We were not really thinking the same.”

In a speech at the state department later, a visibly emotional Mr Tillerson said his tenure would end on March 31st. “What is most important is to ensure an orderly and smooth transition during a time that the country continues to face significant policy and national security challenges,” Mr Tillerson told reporters.

Mr Trump immediately named Mr Pompeo (54), a man with whom he shares “a very similar thought process”, as the new secretary of state. The current deputy director of the CIA, Gina Haspel, will succeed Mr Pompeo as the head of the intelligence agency, the first woman in US history to hold the position.

A career CIA officer, Ms Haspel (61) is likely to face questions about her involvement with US interrogation methods at an operation she ran in Thailand in 2002.

Both Mr Pompeo and Ms Haspel’s appointments are dependent on Senate confirmation hearings, which have been set for April.

Mr Pompeo, a former Congressman from Kansas, received broad support from Republicans on Tuesday and is likely to pass the hearing. The Senate voted by 66 to 22 to approve his appointment as CIA director last year.

Mr Trump and Mr Tillerson had clashed on a number of policy issues, with the former secretary of state critical of the decision to pull out of the Paris climate accord and of the Trump administration’s rejection of the Iran nuclear deal

But Ms Haspel, though well-respected by the intelligence community, is likely to face tough questions about her knowledge of waterboarding techniques used by US intelligence agencies to interrogate suspects.

The Tillerson sacking comes at a sensitive moment in international relations as the president prepares to meet the leader of North Korea for the first time. Mr Tillerson had not been informed of Mr Trump’s plans to meet Kim Jong-un before the president’s surprise announcement last week.

Mr Trump and Mr Tillerson had clashed on a number of policy issues, with the former secretary of state critical of the decision to pull out of the Paris climate accord and of the Trump administration’s rejection of the Iran nuclear deal.

Mr Pompeo, a strong ally of Mr Trump who regularly delivers the daily intelligence briefings to the president, is a former Tea Party Republican. He is a popular figure among Republicans on Capitol Hill, unlike Mr Tillerson, who had no political experience before his appointment to the secretary of state role.

The exodus of staff from the White House has intensified in recent weeks, with economic advisor Gary Cohn, long-term Trump aide Hope Hicks and staff secretary Rob Porter all announcing their resignations.