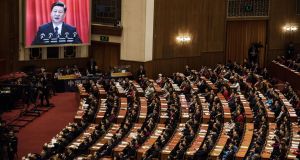 Delegates listen to China’s president Xi Jinping on a large screen during the closing session of the National People’s Congress in Beijing. The talking-shop parliament enshrined Xi as president without term limits. Photograph: Getty images

As they have done for nearly seven decades, delegates at the National People’s Congress in the Great Hall of the People in Beijing will now head back to their Communist Party enclaves in China’s procurates, villages, towns and cities to study the leaders’ decisions.

The party faithful were fervent in their praise for leader Xi Jinping as they gathered on Tiananmen Square to board their buses home, but they will possibly be left with less of a sense of collective Marxist-Leninist endeavour than in previous years, having witnessed Xi, described by critics as a Confucian autocrat or a new emperor, and by ideologues as the “core” of the party, ascend to unassailable power in the world’s most populous nation.

Enshrined by this talking-shop parliament as president without term limits, as well as secretary general of the party and head of the army, Xi made ample use in his speeches of the traditional language of socialism, with references to Marx, Lenin and the founding father himself, chairman Mao.

But the message was that the true star of this year’s NPC was Xi himself, after he enshrined his autocratic authoritarian rule with the abolition of term limits and by installing his allies in key roles at the pinnacle of power.

The rhetoric included a remarkable threat in his closing statement to fight “bloody battles” against China’s enemies, even though it is difficult to pinpoint who these enemies are.

Xi’s focus should be on rebalancing the economy and managing relations with the US, where a trade war is looming, but instead his real priority seems to be consolidating his control in China itself against these unspecified foes.

Everyone must embrace Xi’s vision, or at least acquiesce, and those who refuse risk being deemed China’s enemies

A key development was the introduction of a powerful new anti-corruption body called the National Supervision Commission to keep tabs on 100 million state employees.

Xi’s corruption crackdown has been the greatest achievement of the first five years of his administration. He has got rid of hundreds of thousands of unpopular, corrupt officials at local and more senior levels, as well as political rivals, such as former security czar Zhou Yongkang.

Parliament approved a new law establishing the anti-graft body that was immediately condemned by rights activists who say it could be used against anyone working for the government who challenges those in power.

“Judges, academics and personnel of state-owned enterprises could all face up to six months detention without charge or legal process, and without guaranteed access to lawyers or their families being told,” said Amnesty International’s east Asia regional director Nicholas Bequelin.

Tsang believes the next period will see Xi become even more assertive about what he says China wants. Everyone must embrace Xi’s vision, or at least acquiesce, and those who refuse risk being deemed China’s enemies.

This naturally includes the pro-independence lobby in Taiwan or the democracy activists in Hong Kong.

“It also implies that anyone within the establishment in China or the party who may choose to challenge him, who epitomises the party and the Chinese people, will be deemed an enemy,” said Tsang.