Maureen Dowd: Trump has embraced being a joke president 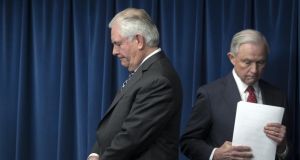 White House chaos: Rex Tillerson, who reportedly learned his fate from Trump’s chief of staff while on the toilet, and Jeff Sessions, who tried to save his own job by firing Andrew McCabe. Photograph: Stephen Crowley/NYT

This was the week Donald Trump became president of the United States. Or at least the week he became the president we were always expecting. He ceased bothering to pretend that he was ever going to do the job in any normal sense of the word. He decided to totally own the whole, entire joke that he is.

He started hiring people right off TV. He extended his tiny fingers into his giant flat screen, Purple Rose of Cairo style, and dragged cable conservatives directly into his administration. We’ve always known Trump makes stuff up. But now he has stopped bothering to pretend he doesn’t. Truthful hyperbole is out. Outlandish fabrication is in.

Trump began bragging to Republicans at a private fundraiser in St Louis on Wednesday: Oh, get a load of this trade stuff I made up to outfox that fox Justin Trudeau. I felt bad doing it to such a nice, good-looking guy. But it’s hilarious!

He is no longer bothering to pretend that governing involves a learning curve. Now he finds it’s clever to be a fabulist, concocting phoney facts about the trade deficit when talking to the Canadian prime minister – one of the United States’ closest allies – or inventing a story for donors about how Japanese officials test US cars by dropping a bowling ball on their hoods from six metres up to see which ones dent.

The president thinks he’s navigating to his true north while the rest of the world thinks he’s headed due south. Trump & Friends presented this dizzying White House purge as a twisted version of him growing into the job, even as everyone else felt he was going in the opposite direction, behaving disgracefully by getting rid of Rex Tillerson in a tweet and tormenting other staffers he finds annoying or uppity.

The Daily Beast reported that Tillerson learned his fate from John Kelly, Trump’s chief of staff, while on the toilet, which is apropos, because Bill Maher likes to say Trump does his morning business while doing his morning business. (HR McMaster, the national-security adviser, is probably afraid to hit the bathroom now.)

The new Fake News narrative is that there is CHAOS in the White House. Wrong! People will always come & go, and I want strong dialogue before making a final decision. I still have some people that I want to change (always seeking perfection). There is no Chaos, only great Energy!

Andrew McCabe FIRED, a great day for the hard working men and women of the FBI - A great day for Democracy. Sanctimonious James Comey was his boss and made McCabe look like a choirboy. He knew all about the lies and corruption going on at the highest levels of the FBI!

Trump got his next moment of gross exaltation when Jeff Sessions, frantically trying to save his own job as attorney general, fired Andrew McCabe, the deputy FBI director, hours before he would have become eligible for his government pension and on his birthday weekend. John Brennan, the former director of the CIA, tweeted that Trump will take his “rightful place as a disgraced demagogue in the dustbin of history”.

Then the president’s lawyer John Dowd issued a statement on Saturday saying he will “pray” that Rod Rosenstein, the deputy attorney general, “will follow the brilliant and courageous example” of Sessions and end the Russia investigation entirely.

Trump is giddy about all the CHAOS – he capitalised it on Twitter – feeling that he’s ridding himself of any idiots who called him a moron or dumb as a rock and any economists who don’t understand what a great dealmaker he is. Except the one thing his presidency has definitively proved is that he doesn’t have the foggiest idea how to prepare for a negotiation, let alone negotiate.

Far from the A-team he promised, Trump  has hired a bunch of swamp schnorrers

“So Trumpian!” Kudlow said, laughing. It’s the final Foxification of politics. Trump spends all his time watching Fox News, basing his opinions and tweets on it, and now he’s simply becoming one with it. He is even willing to overlook his distaste for the yeti moustache of the warmongering John Bolton and consider the Fox News analyst as a replacement for McMaster.

Roger Ailes, the channel’s founding chief executive, would be so proud, if he were still alive and harassing women. Trump thinks he’s a fabulously devious manager creating “great energy”, with great ratings coming from his talent for theatrical twists and turns. But he’s really inhumane, playing people against one another and widely discussing successors for officials who haven’t even been officially informed that they’re walking the plank.

And, far from the A-team he promised, he has hired a bunch of pathetic, disgusting swamp schnorrers who can’t stop using taxpayer money to fund their office furniture or office redesign or luxury plane trips with their wives.

“I like conflict,” Trump said this month at a news conference with the Swedish prime minister, smacking his fists together and adding, “I like watching it, I like seeing it, and I think it’s the best way to go.” Never mind that a lot of the country – and the world – craves stability. Although the president may appear unconstrained, intoxicated with escaping the net of those who displease him by telling him “No”, he is getting ever more enmeshed in another net: Robert Mueller’s.

“I think Trump is royally pissed about the Mueller subpoena of the Trump Organization records,” Trump’s biographer Michael D’Antonio says about the special counsel crossing the president’s red line. “He fears the nakedness of his true business activities’ being revealed far more than the shame of Access Hollywood or Stormy Daniels. Unlike the show of blank paper in file folders conducted when he supposedly stepped away from his businesses, this will require real documents, and I doubt he can count on people lying for him.”

If you’ve ever had a narcissistic boss you know that they hate to hear any criticism and love to whack the naysayers and replace them with more compliant types. The circle of sycophants, who do not care about the boss, often spurs the leader’s flameout.

President Trump is doing it his way now. But soon he’ll be doing it Mueller’s way. – New York Times