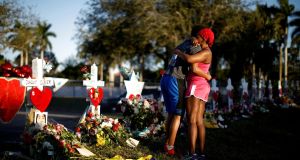 Adin Chistian (16), student of the Marjory Stoneman Douglas High School, with his mother, next to the crosses and Stars of David to commemorate Parkland, Florida victims. Photograph: Reuters

The statement, from White House press secretary Sarah Huckabee Sanders, came as people across the US spoke out about the frequency of mass shootings after the tragedy at Marjory Stoneman Douglas high school where Nikolas Cruz allegedly killed 17 students and teachers with an AR-15 assault rifle.

Ms Sanders said the president was “supportive” of congressional action after speaking to John Cornyn, a Republican senator who along with his Democratic colleague Chris Murphy crafted legislation to bolster the background check system.

“While discussions are ongoing and revisions are being considered, the president is supportive of efforts to improve the federal background check system,” she said.

The Florida massacre – the deadliest school shooting since 26 were killed at Sandy Hook elementary school in Connecticut in 2012 – has reignited the recurring debate about gun control in the US.

According to the Gun Violence Archive, the number of people killed by guns so far this year is 1,981 – including an average of 30 deaths per day in the five days since the shooting at Marjory Stoneman Douglas.

The Cornyn-Murphy measure would not introduce gun control measures. Instead, it includes penalties and inducements aimed at improving the reporting to an existing federal database. The database lists people who are prohibited from buying guns for various reasons that include being an illegal drug user, having a criminal record, or someone who has been adjudicated to be mentally ill.

Mr Murphy, a Connecticut senator, responded to the White House statement by saying it was “another sign the politics of gun violence are shifting rapidly”, but added that “no one should pretend this bill alone is an adequate response to this epidemic”.

Responding to the Florida shooting last week, Mr Trump avoided commenting on the issue of gun control, focusing instead on the need for the US to tackle mental health issues.

Mr Trump and politicians who receive campaign donations from the National Rifle Association came under attack at the weekend from survivors of the Florida shooting, who plan to march on Washington on March 24th.

“Politicians who sit in their gilded House and Senate seats funded by the NRA telling us nothing could have been done to prevent this, we call BS,” Emma González, a pupil at the school, said in a powerful speech.

Gun control advocates argue that no other developed country witnesses the same level of gun violence as America. To make the case for more restrictions, some point to the example of Australia, which has not had a mass shooting since it toughened its gun laws following a massacre three decades ago that claimed 35 lives.

Opponents of tighter restrictions argue that people, and not guns, are to blame for gun deaths, which have increased in recent years. Gun Violence Archive calculates that the number of people killed by guns – not including suicides – has risen steadily from 12,556 in 2014 to 15,592 last year.

Critics accuse Congress of failing to act because of the influence of the NRA, which targets lawmakers who oppose its agenda. That makes the passage of gun control legislation less likely in a year such as 2018 when there will be midterm elections.

In the wake of the October 2017 massacre in Las Vegas that left 58 people dead, Mr Trump and other Republicans said they were open to banning bump stocks devices that help convert a semi-automatic rifle into an automatic weapon. But there has been no movement on the issue even though it received rare support from the NRA. Copyright The Financial Times Limited 2018