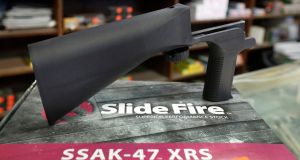 There is a Presidents’ Day sale on bump stocks, the device the Las Vegas shooter put on his rifles to increase their firing rates. Slide Fire Solutions, a bump stocks manufacturer, is offering 10 per cent off with coupon code: MAGA.

That is a salute to the campaign slogan of US president Donald Trump, who promised to “Make America Great Again”, and who has responded to the deadly massacres in the past five months by continuing to oppose any new gun control laws.

“#HeresToFreedom,” the company wrote in a marketing email announcing the sale.

Before the Las Vegas shooting, which left 58 people dead and hundreds injured, bump stocks were an obscure range device popular with firearms enthusiasts.

After the Las Vegas shooting, the National Rifle Association and Mr Trump’s White House expressed some openness to further restricting, if not banning, a dangerous device used in the worst mass shooting in recent US history. Despite early signs of bipartisan support for a bump stock ban in Congress, the effort fizzled out. A handful of states and cities, including Massachusetts and New Jersey, have passed local bump stock bans.

The White House did not immediately respond to a request for comment on Slide Fire’s choice to use the president’s campaign slogan as a marketing tactic. It did not comment on whether the White House now supports or opposes further restrictions on bump stocks.

A few days after the shooting, White House press secretary Sarah Huckabee Sanders said the president was “open” to a conversation about what to do about bump stocks and similar devices. “We would like to see a clear understanding of the facts.”

Slide Fire did not immediately respond to an email and a phone call seeking comment on what message it was trying to convey by using Mr Trump’s slogan as a marketing device. The small company, based in Moran, Texas, touts its American-made products.

If the company had been forced to close after the outrage following the Las Vegas shooting, “it would hurt the whole town, the school. We pay a very large amount of property taxes,” Slide Fire founder Jeremiah Cottle, an Air Force veteran, told the Dallas Morning News in early October. The newspaper reported that the bump stock manufacturer had once employed about a 10th of the town’s entire population, and that it remained one of the area’s largest employers. – Guardian Service