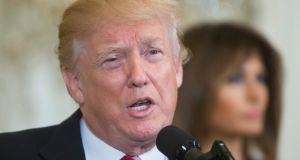 US President Donald Trump’s move to end a programme protecting hundreds of thousands of children of undocumented immigrants from deportation was blocked by a federal judge in Brooklyn, New York.

It’s the second time in less than two months that a US judge ruled that rescinding the Obama-era programme as proposed would be illegal.

The judge issued a preliminary ruling which ordered the government to keep processing renewal requests, echoing the January 9th ruling of US district judge William Alsup in San Francisco.

US attorney general Jeff Sessions announced on September 5th that the administration would end the programme on March 5th, calling it “an unconstitutional exercise of authority by the executive branch”.

The administration gave Dreamers until October 5th to reapply for their permits. Trump proposed a resolution to the DACA dispute that would provide a path to citizenship for about 1.8 million immigrants eligible for the Dreamers programme in exchange for $25 billion for border security, including a wall on the US-Mexico border, ending the ability of US citizens to sponsor relatives for green cards and an end to the visa lottery programme.

The president’s proposal is now being considered in the Senate.

In his ruling, Garaufis said Sessions erred in concluding the programme was unconstitutional because it was enacted by the Obama administration without Congressional authority.

Sixteen states, including New York, and Washington DC sued the Trump administration in September to block the administration’s move to end the programme.

New York attorney general Eric Schneiderman hailed the decision, saying, “federal courts from coast to coast have now reviewed the record and reached the same conclusion: President Trump’s decision to rescind DACA was illegal.” Washington attorney general Bob Ferguson, who was also part of the coalition, said it was “an exciting day for Dreamers and another courtroom defeat for President Trump.”

The US department of justice didn’t have an immediate comment on the decision.

In his ruling, Garaufis questioned whether Sessions’s views are consistent with those of the Trump administration, noting there’s a contradiction between what the attorney general has said and the president’s September 5th tweet stating “Congress now has 6 months to legalize DACA (something the Obama Administration was unable to do). If they can’t, I will revisit this issue!”

“It is not clear how the President would ‘revisit’ the decision to rescind the DACA programme if the DACA programme were, as the attorney general has stated, ‘an unconstitutional exercise of authority by the executive branch,’” Garaufis said.

While the government has argued in court papers that Trump simply “emphasised the need for legislative action,” Garaufis said that argument “is unsupported by the text of the president’s tweet.”

Garaufis said his order, which like Alsup’s applies nationwide, doesn’t mean that any DACA applicant must be automatically granted an extension nor does it prevent the US from revoking individual DACA recipients’ deferred deportation status.

The ruling comes three days before the US supreme court is set to consider at a private conference whether to hear a Trump administration appeal of Alsup’s ruling.

The administration is asking the justices to hear arguments and rule by the end of their term in June.