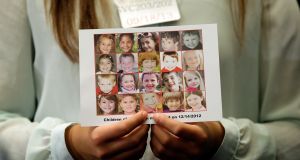 A woman holds a photograph of victims of the December 2012 shooting at Sandy Hook Elementary School. Photoraph: Win McNamee/Getty Images

The shootings at a Florida high school in which 17 peolple have been killed is the the latest outbreak of gun violence that has become a regular occurrence at US schools and colleges.

Below are some of the worst US school shootings in the last 20 years.

Azetec, New Mexico, December 7th, 2017 - A man (21) disguised as a student enters the local high school, kills two students and then shoots himself to death.

Roseburg, Oregon, October 1st, 2015 - A man opens fire on the campus of Umpqua Community College, killing nine people before he is shot dead by police.

Marysville, Washington, October 24th, 2014 - A freshman at Marysville-Pilchuck High School fatally wounds four students in the cafeteria before killing himself.

Sheperdstown, West Virginia, September 2nd, 2006 - A man (49) shoots himself and his two sons to death during a visit to the campus of Shepherd University.

Tucson, Arizona, October 29th, 2002 - A failing student shoots and kills three professors and then himself at the University of Arizona School of Nursing.

Grundy, Virginia, January 16th, 2002 - A recently dismissed graduate student kills a dean, a professor and a student at the Appalachian School of Law and wounds three others.

Littleton, Colorado, April 20th, 1999 - Two teenagers rampage through Columbine High School, fatally shooting 12 students and a teacher and wounding more than 20 others before killing themselves.

Jonesboro, Arkansas, March 24th, 1998 - Two boys, ages 11 and 13, fire on their middle school from woods, killing four girls and a teacher and wounding 11 others. –Reuters