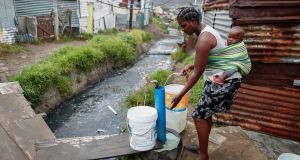 A drought in three South African provinces that is threatening to leave Cape Town residential areas without any municipally-supplied water has been declared a national disaster by South Africa’s government.

The Northern Cape, Western Cape and Eastern Cape had already been declared provincial disaster areas over the crisis, but the magnitude and severity of the emergency prompted the national executive to reclassify their status on Tuesday.

The National Disaster Management Centre has taken over management of the crisis, its deputy director general, Dr Mmaphaka Tau, said in a statement.

In January, Western Cape premier Helen Zille wrote to the government calling for the drought to be declared a national disaster when it became apparent that “Day Zero” – when Cape Town is forced to turn off residents’ taps due to a lack of water supply — was a likely reality.

“The reason that I think it would be useful to declare a national state of disaster is because then everything is in place for anything that we need to do that requires us to shortcut certain systems,” Ms Zille said.

At the time, Cape Town officials had warned that the combination of the unprecedented drought and unsustainable water consumption meant that the city’s six feeder dams would reach unusable levels by April 12th.

However, a large reduction in water usage by Western Cape farmers and Cape Town residents, coupled with some recent rainfall, has pushed Day Zero out to June 4th.

The latest data from Cape Town officials shows that the city’s six feeder dams were on average 24.9 per cent full as of February 13th.

Queueing by the public for water rations will begin once the dam levels drop to 13.5 per cent full, because of the difficulty in extracting the last 10 per cent.

If Day Zero arrives, up to 2 million Cape Town residents will have to queue at 200 designated points about the city for a daily quota of 25 litres of water.

Last week the city’s residents used an average of 526 million litres of water per day, which remains above the target of 450 million litres, but is an improvement on recent weeks.

In its efforts to avoid Day Zero, city officials have introduced several “demand management” techniques to help reduce water usage. These include pressure management, which lowers consumption, and household flow regulators for all residences where consumption is too high.

Three desalination plants that will add approximately 16 million litres of water per day into the system by May are also currently under construction.

Scientists blame the water shortages on the changing climate, which is bringing rainfall to the city later than usual and making it drop more erratically. However, poor water infrastructure and a failure by local governments to respond quickly enough to the worsening crisis have also played a part.