Fastfood chain KFC said on Monday (February 19) it had been forced to close hundreds of its British stores because of a shortage of chicken. Customers in Bristol, England, were asked about their alternative lunch options. 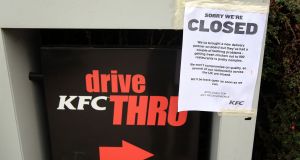 The US-owned franchise said most of the chickens due to be dismembered, battered and immersed in boiling oil over the past few days had decided to go in a different direction.

“The chicken crossed the road, just not to our restaurants,” the company said.

“We’ve brought a new delivery partner onboard, but they’ve had a couple of teething problems – getting chicken out to 900 restaurants across the country is pretty complex.”

Some of the missing chickens may be Irish because the company is supplied by farms in both Britain and Ireland.

Restaurants in the Republic of Ireland and the North are open as usual, KFC said.

A KFC worker in Teesside said his branch had been closed since Friday but angry customers were still trying the door desperate for a drumstick.

“It’s annoying and frustrating for us. It’s nuts,” he told Gazette Live.

“It’s damaging the brand. The amount of people trying the door and walking off is incredible. We are getting abuse off people who are surprisingly impatient about chicken.”

One KFC customer in Bristol tweeted that the closures were “basically the end of the world” while a parent in Bradford complained about having to drive another 20 minutes “to not break a promise to a child”.

KFC said the company was working flat out to get the chicken back into its customers’ paper boxes and buckets, before adding ominously that “the colonel is working on it”.