An insider’s view of the Macron administration

‘He’s not satisfied with status quo. If you tell him something is impossible, he says it isn’t’ 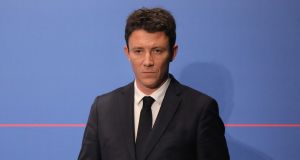 Benjamin Grieveaux served as spokesman for Macron’s presidential campaign, then gave up a seat in the National Assembly to hold a portfolio in the finance ministry before becoming government spokesman last November. Photograph: Ludovic Marin/AFP/Getty Images

Benjamin Griveaux is French government spokesman, with the rank of cabinet member. He is one of a handful of young men who rallied around Emmanuel Macron in late 2015 to plot a revolution in French politics.

“It was a completely blank page. We had no elected officials, no money. But we had ideas,” Griveaux told a meeting of the Anglo-American Press Association in Paris.

Griveaux served as spokesman for Macron’s presidential campaign, then gave up a seat in the National Assembly to hold a portfolio in the finance ministry before becoming government spokesman last November. Like Macron, he is 40 years old, from an upper middle-class family and has worked in both the public and private sectors.

Griveaux says Macron’s most salient characteristic is that “he never considers anything is acquis” – permanently acquired. “He’s not satisfied with the status quo. If you tell him that something is impossible, he says it isn’t.”

Griveaux was a founding member of Macron’s En Marche! movement, since renamed La République en Marche. The group collected 30,000 questionnaires across France in 2016 and 2017. “If I had to summarise it in one sentence, people told us they were prevented, by glass ceilings, by obstacles, by barriers. We no longer had a republic of progress, of meritocracy, of fulfilment through work. People no longer believed in it... Our social model was stuck,” Griveaux says.

Macron and his followers are determined to attack what is known as la rente or social immobility that guarantees security for the privileged while barring others from advancing. Griveaux says the education system must be shaken up. Fundamentalist Islam made inroads in dozens of French banlieues (suburbs) because Islamists provided “social solidarity” that the state did not, Griveaux says. “We must concentrate public funds in those places where there is the least private capital.”

The US academic Francis Fukuyama wrote in 1992 that western liberal democracy had reached a happy “end of history”. France under Macron “has not reached the end of history”, Griveaux says. The president “is not non-ideological” but he takes a different approach to France’s historic tendency to “twist reality so it fits ideology . . . we as a country get dizzy between [the mysticicsm of] Pascal and [the rationality of] Descartes.... Now we are becoming more like Anglo-Saxons.”

Macron’s adversaries mistook his political centrism for weakness, Griveaux says. “In fact, he’s not centrist so much as central… The most disruptive thing he accomplished was reintroducing the notion of risk in French political life.”

US president Donald Trump has invited Macron for a state visit to Washington in late April. Trump said last month that he might keep the US in the Paris climate accord because of his warm relationship with Macron. He is also contemplating a military parade inspired by the Bastille Day parade he witnessed in Paris.

Griveaux says Trump and Macron will certainly discuss the climate accord and multilateralism – in particular in the Middle East – when Macron goes to Washington. “They will probably talk about the status of Jerusalem.”

Pressed on the nature of the relationship between the US and French leaders, Griveaux said: “I don’t think he’s buddies with Trump. When you’re a head of state, it’s not about feelings . . . Whether it’s chancellor [Angela] Merkel or the leaders of the US, China, the UK or Italy, the best way of knowing what the other [head of state] wants is to talk to him or her about it. The goal of the president isn’t to make buddies.”

Asked about an EU clause that would punish Britain if it failed to respect EU law during the Brexit transition period, Griveaux said: “One must never humiliate, never punish. That would strengthen anti-European sentiment in a lot of countries . . . But Brexit means Brexit. There is no question of cherry-picking and making bilateral agreements.”

The failure or success of Macron’s European initiative depends largely on the weakened German chancellor’s ability to exert control over her new coalition. “I think Angela Merkel wants to leave her mark on Europe. She’s in her last term now, and she has a partner in France with whom she can do it,” Griveaux says.

Next year’s European parliamentary elections will be comparable to mid-terms for Macron. He suffered a setback last week, when the Strasbourg assembly rejected Macron’s idea of Europe-wide candidacies to fill some of the seats the UK gives up with Brexit.

Macron is changing the French system so that MEPs will be elected on nationwide, not regional, tickets. He is following the same model used in the presidential election, of broad consultation with the public, “to identify the European subjects that citizens feel strongly about”, Griveaux says. “There’s a risk that the election becomes a sort of referendum on whether people are for or against Europe. There’s a real risk of a Eurosceptical parliament.”