Labour signals that Britain should remain in customs union 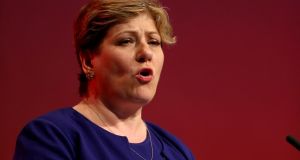 One of Jeremy Corbyn’s closest allies has hinted that Labour is set to call for Britain to remain in the customs union after it leaves the European Union.

Shadow foreign secretary Emily Thornberry suggested that the party, which currently backs customs union membership for a transition period after Brexit, is moving towards support for permanent membership of it.

“We’ve looked at it and we cannot see a way forward when it comes to Northern Ireland or to tariff-free trade across Europe without us being in some form of customs union, that probably looks very much like the customs union that there is at the moment,” she told ITV’s Peston on Sunday.

Theresa May’s government is committed to leaving the customs union and the single market after Brexit, although it is seeking a transition agreement with the EU which would leave trading arrangements unchanged for almost two years. Ms Thornberry said Labour accepted the result of the 2016 referendum and she suggested that the party would not seek to remain in the single market after Brexit.

“As for the single market, you know and I know that it’s very difficult for us to remain in the single market as it currently is because nobody can pretend that the referendum didn’t include a debate on immigration and we want to have fair rules and managed migration when it comes to immigration so we need to negotiate something,” she said.

Polls show strong support among Labour Party members for remaining in both the customs union and the single market but some senior figures in Mr Corbyn’s circle believe that EU state aid and public procurement rules are incompatible with some of the party’s manifesto commitments.

Ms May will chair an all-day meeting of senior ministers at her official country residence of Chequers next Thursday in an attempt to agree a common position ahead of the second phase of Brexit negotiations. Among the options under consideration is a proposal that Britain would remain aligned with EU regulations for some sectors but would be free to ignore them for others.

On Sunday, however, the European Parliament’s chief negotiator Guy Verhofstadt said that no such bespoke deal would be available to Britain.

“There can not be a type of saying ‘oh this is interesting, that we like, this is not interesting for us, we dislike and we don’t want it’. What will be in that part of the association agreement we will see,” he told the BBC’s Andrew Marr Show.

Mr Verhofstadt said Britain should not expect its financial services to retain full access to Europe if it leaves the single market and he warned that there would be no trade deal agreed before the country leaves the EU.

“And the third thing that will be possible is an annex, a political declaration describing, more or less in detail I should say, the future – what the future relationship will be.”