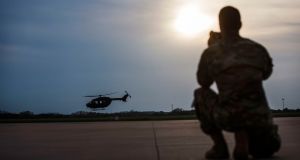 Texas on Friday became the first state to deploy National Guard troops to the southern border of the United States after US president Donald Trump announced he would send the military there.

State officials said 250 Texas National Guard personnel would be dispatched to the border within 72 hours. The mobilisation began shortly after 7pm Friday at the Armed Forces Reserve Center in Austin, as two light-utility Lakota helicopters carrying a total of four service members lifted off from the taxiway and flew south past a fading sun.

Brig Gen Tracy Norris, commander of the Texas Army National Guard, said the deployment would begin meeting “the priorities of the governor and the president in securing our border”. In addition to troops, the Guard said it would send ground surveillance vehicles and light and medium aircraft.

The announcement in Austin came the same day Republican governor of Arizona Doug Ducey said about 150 members of the National Guard in his state would deploy next week to the border.

Other governors have weighed in as well, with their support or criticism of the plan falling along party lines. The Republican governor of New Mexico Susana Martinez vowed to send troops soon, while the Democratic governor of Montana Steve Bullock refused.

Defense Secretary James Mattis on Friday signed orders authorising funding for up to 4,000 National Guard troops for the operation through September 30th under the “command and control of their respective governors”.

National Guard troops have been deploying to the southern border for decades after orders by presidents and governors from both parties. In 2010, the Democratic governor of New Mexico at the time Bill Richardson ordered a few dozen troops to his state’s border with Mexico after the killing of an Arizona rancher.

But Mr Trump’s mobilisation, which could deploy thousands of troops, has reignited concerns in Texas and elsewhere about the militarisation of border communities and has angered local officials and lawmakers who say that the troops are not needed and that they give the false impression that their cities are under siege. – New York Times