China’s defence minister says Russia visit ‘a signal’ to US 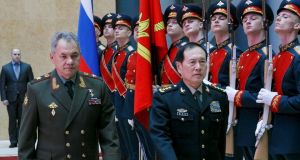 The US should pay attention to increasingly close military ties between China and Russia, China’s new defence minister has warned during a visit to Moscow, describing his visit as a “signal” to Washington.

“The Chinese side has come to show Americans the close ties between the armed forces of China and Russia, especially in this situation. We’ve come to support you,” Wei Fenghe said after a meeting with his Russian counterpart Sergei Shoigu.

“I am visiting Russia as a new defence minister of China to show the world a high level of development of our bilateral relations and firm determination of our armed forces to strengthen strategic co-operation,” he said.

He made the remarks, which were carried by the Russian state news agency Tass, as he attended a security conference in Moscow.

Mr Wei visits Moscow at a time when relations between the West and Russia are at a low ebb after the March 4th poisoning of former spy Sergei Skripal and his daughter, Yulia, in Salisbury, England. The UK suspects the Russian government was behind the attack.

A close confidant of President Xi Jinping, Mr Wei (63) was formerly head of the People’s Liberation Army’s (PLA) missile unit before it was divided into a standalone rocket force and a strategic support force.

He was named defence minister at China’s rubberstamp parliament in Beijing last month.

Mr Xi has made reform of the military a key part of his policies, and has pledged to make the PLA a world-class military force by 2049, when the People’s Republic of China celebrates its centenary.

Mr Xi and Russian president Vladimir Putin have forged close bilateral ties, and the Chinese leader is said to be an admirer of Mr Putin’s strongman approach to governance and dislike of liberal democracy.

In November they pledged to enhance their co-operation on international affairs.

China and Russia were formerly communist rivals but, under Mr Putin, ties between Moscow and Beijing have become much closer, with both leaders opposing what they see as a “unipolar” world dominated by the US.

Both countries have backed each other on the UN Security Council on issues such as North Korea and Syria, usually against the US.

Mr Putin is due to visit China later this year, for his first visit since being elected for a fourth term. Mr Xi recently did away with the two-term limit on his presidency, freeing the way for him to rule China indefinitely.