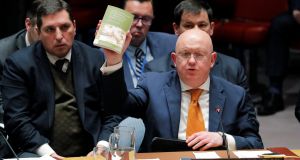 Russian ambassador to the United Nations Vasily Nebenzya quotes from ‘Alice’s Adventures in Wonderland’ and ‘Through the Looking Glass’ as he speaks regarding a nerve agent attack in Salisbury, England. Photograph: Lucas Jackson/Reuters.

Russia has told Britain at the United Nations Security Council that “you’re playing with fire and you’ll be sorry” over its accusations that Moscow was to blame for the poisoning of a former Russian spy and his daughter in Salisbury.

It was the second showdown between the nations at the council since the March 4th nerve agent attack on Sergei Skripal and his daughter Yulia in the English town. Russia, which requested Thursday’s council meeting, denies any involvement.

The attack has had major diplomatic ramifications, with mass expulsions of Russian and Western diplomats. The 15-member security council first met over the issue on March 14th at Britain’s request.

“We have told our British colleagues that ‘you’re playing with fire and you’ll be sorry’,” Russian UN ambassador Vassily Nebenzia said during a speech that went on for more than 30 minutes which attempted to poke holes in Britain’s allegations against Moscow.

He suggested that anyone who watched television crime shows like Britain’s Midsomer Murders would know “hundreds of clever ways to kill someone” to illustrate the “risky and dangerous” nature of the method Britain says was used to target Mr Skripal.

British police believe a nerve agent was left on the front door of the Salisbury home where Mr Skripal lived after he was freed in a spy swap. He was a military intelligence colonel who betrayed dozens of Russian agents to Britain’s MI6 spy service.

“We believe that the UK’s actions stand up to any scrutiny,” British UN ambassador Karen Pierce told the Security Council. “We have nothing to hide ... but I do fear that Russia might have something to fear.”

Earlier this week at the global chemical weapons watchdog, Russia called for a joint inquiry into the poisoning of the Skripals, but lost a vote on the measure.

“Allowing Russian scientists into an investigation where they are the most likely perpetrators of the crime in Salisbury would be like Scotland Yard inviting in Professor Moriarty,” Pierce told reporters earlier on Thursday, citing a character from “Sherlock Holmes.”

At the end of the council meeting, Mr Nebenzia read a passage from the novel Alice in Wonderland about a trial where the queen demands the sentence first and the verdict afterward.

“Does that remind you of anything?” he added.

Ms Pierce responded: “There is another very good quote from Alice in Wonderland which is: ‘sometimes I’ve believed as many as six impossible things before breakfast’ so I think that’s the quote the suits my Russian colleague best.”