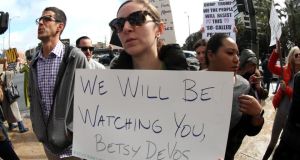 A protestors holds a placard that reads “We will be Watching You, Betsy DeVos” outside US Senator Dianne Feinstein’s office in Los Angeles on Tuesday. Photograph: Mike Nelson/EPA 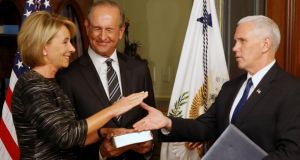 US vice-president Mike Pence concludes the swearing in of education secretary Betsy DeVos, joined by her husband Dick DeVos, at the White House on Tuesday. Photograph: Jonathan Ernst/Reuters

All week the adverts have been flashing thick and fast across television screens, urging people to lobby their Senate representatives to vote for – or against, depending on your political persuasion – Betsy DeVos as education secretary.

Even by Washington standards the ads were hard-hitting, reflecting the unlikely emergence of DeVos as the most divisive figure so far to face Senate confirmation hearings.

On Tuesday, she was endorsed by the Senate, but only after vice-president Mike Pence was forced to cast the deciding vote – the first time the procedure has been used to confirm a cabinet secretary. Two Republicans – senators Susan Collins of Maine and Lisa Murkowski of Alaska – chose to join the 48 Democrats in the Senate to oppose DeVos’s nomination, leading to a 50/50 tie in the 100-seat house.

While her hearing before the Senate education committee last week had been gruelling, she was expected to be confirmed as a matter of course, as had happened with Trump’s previous cabinet nominees, including secretary of state Rex Tillerson and defence secretary James Mattis.

Education secretaries tend to get an easy ride – much US education policy is made at a local and state level. But DeVos’s poor performance at her confirmation hearing helped galvanise protesters across the country and prompted teacher unions to question her commitment to the public school system.

Unluckily for the Michigan Republican, timing also worked against her. Increasing outrage over Trump’s immigration ban and criticism of the judiciary has soured the bipartisan mood in Congress over the last week, with the result that the 59-year-old billionaire philanthropist has found herself in the maelstrom of increasing tensions between Republicans and Democrats on Capitol Hill.

Democrats were withering in their comments on DeVos: “In my mind she is the least qualified nominee in a historically unqualified cabinet,” said Senate minority leader Chuck Schumer, opening the debate on her nomination.

While Democrats lack the numbers to block a nominee, all signs are that the recriminations over DeVos’s nomination will continue over the next week as various Trump nominees face votes, with Democratic senators likely to push the delaying tactics at their disposal to their limits.

In a sign of an increasingly bitter mood, during a debate on senator Jeff Sessions’s nomination as attorney general late on Tuesday night, Democratic senator Elizabeth Warren was accused of breaking Senate rules after she read two letters, including one from the wife of Martin Luther King, opposing Sessions’s 1986 nomination to become a federal judge.

Democrats reacted with fury, accusing Republicans of “silencing” Warren, with a number of Democratic senators continuing to protest against Sessions’s nomination after their colleague was forced to sit down. Sessions, a senator from Alabama, was nonetheless expected to be endorsed late on Wednesday night.

While Democrats are likely to put up a fierce battle with the remaining nominees, Republican support for the president’s choices will also be in the spotlight.

The defection of the two Republican senators over DeVos’s nomination was significant, but it is unlikely that many others will follow their lead.

Although cracks are beginning to show in the relationship between Trump and Republicans on Capitol Hill, most are unlikely to waste political capital on opposing the president’s cabinet nominees.

There may be bigger battles to fight on issues such as immigration and Obamacare, which could test the loyalty of the Republican caucus.

Some fear that disloyalty to Trump could impact on their midterm election hopes in 2018 should the president back rival candidates. Given the relentless pace of activity during the first three weeks of Trump’s presidency, these are early days for the 115th Congress.