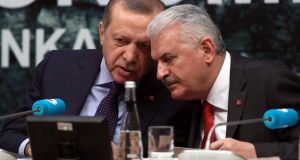 The Turkish government has dismissed more than 4,400 public employees, including hundreds of academics, in a fresh round of purges that have in the past elicited criticism from its western allies.

The dismissals, which spanned the education ministry, gendarmerie, security services, as well as the ministries of the interior, economy and foreign affairs, came just hours after the first phone conversation between the US president, Donald Trump, and the Turkish president Recep Tayyip Erdogan.

After years of estrangement under Barack Obama over the White House’s refusal to forcefully remove Syria’s President Bashar al-Assad from power as well as Washington’s support for Kurdish paramilitaries, Ankara is hoping to rebuild its relationship with the US.

In a brief statement, Mr Erdogan’s office said he had wished Mr Trump success in his presidency and that the two leaders “shared commitment to combating terrorism in all its forms”. Mr Trump also praised Turkey’s contribution to the fight against Islamic State (also known as Isis) in Syria.

Turkish media reported that the new director of the CIA, Mike Pompeo, would travel to Turkey on his first official trip abroad as a result of the phone call, hinting at the closer relations Ankara and Washington are likely to enjoy after Mr Obama’s departure.

Though the official statements were scant on details, Mr Erdogan is likely to have raised the contentious issue of American support for the Kurdish fighters in northern Syria, as well as the creation of safe zones for refugees and greater support from the US-led coalition in the Turkish campaign in al-Bab.

Turkish-backed Syrian rebels have cleared Isis from a stretch of territory spanning much of northern Syria west of the Euphrates, and have surrounded the city of al-Bab, the last major Isis stronghold in the province of Aleppo.

It said in a written statement that 58 Isis militants were killed in air strikes, artillery fire and clashes as part of those operations.

The Turkish government has also demanded the extradition of Fethullah Gülen, a reclusive preacher living in Pennsylvania whose movement is widely believed in Turkey to have orchestrated a failed coup attempt last July that killed over 200 people.

Turkey’s two-pronged crackdown since the attempted coup has targeted alleged Gülenists and sympathisers in the judiciary, police, academia, media and civil service, as well as people accused of fomenting propaganda on behalf of the Kurdistan Workers Party (PKK), a separatist group fighting an insurgency against the state.

But critics say the purges have turned into a witch-hunt targeting the political opposition. Several opposition lawmakers, including the two heads of the pro-Kurdish Peoples’ Democratic Party (HDP), have been arrested on terror propaganda charges. Some of those dismissed from universities are leftists who have little to do with the Gülen movement.

One of those dismissed in the last round of purges announced on Monday was Ibrahim Kaboglu, a prominent constitution professor who opposed the recently announced changes to the constitution.

As a result, in recent months Turkey has drifted away from its traditional allies in Nato, rebuilding bridges with Russia after months of estrangement last summer following the downing of a Russian jet in Turkish airspace.

In addition to lukewarm support offered by Europe and the US in the aftermath of the coup attempt, Ankara has faced criticism over the ruling party’s efforts to push through constitutional amendments in a spring referendum that would grant Mr Erdogan broader powers.

Policy disagreements on Syria have compounded the tensions, with Turkey repeatedly threatening to scrap an agreement that has curbed the influx of refugees into Europe and to hold a referendum on ending accession negotiations to the European Union.