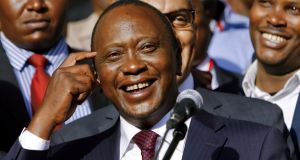 Kenya’s president Uhuru Kenyatta: the collapse in 2015 of a case against him at the International Criminal Court was one of the many setbacks the court has faced. Photograph: Daniel Irungu/EPA

With the departure of the Democrats from the White House and the advent of Trump-style nationalism, expensive, unwieldy, well-intentioned international organisations are no longer in fashion – and the embattled International Criminal Court (ICC) could be particularly vulnerable.

If the past few years, and its inaction over Syria in particular, have illustrated the degree to which the court is hamstrung by its dependence on a dysfunctional UN Security Council, then the row over its 2017 funding shows an even more insidious threat at work.

Despite its gleaming new €206 million headquarters, funding for the ICC’s operations (negotiated at the annual Assembly of States Parties – a meeting of the countries that signed and ratified the Rome Statute which set up the court in 2002) is always a sore point.

With the collapse of the case against Kenya’s president, Uhuru Kenyatta; the suspension of investigations in Darfur; the withdrawal of South Africa, Burundi and Gambia from the court; and Russia’s decision to remove its signature from the founding statute, the ICC’s growing crisis of relevance has overshadowed all else.

Behind the scenes, however, anger over the court’s inability to prosecute those responsible for some of the world’s most shocking crimes has been coupled with relentless criticism of its rising budget – and of the “disproportionate” amount allocated to the prosecutor, who drives its investigations.

Ironically, that criticism has come not from those African Union states who brand it a “post-colonial” instrument of the West (which it denies), but from a predominantly western group of countries who have been among its most ardent supporters, in public at least.

Their criticism is based largely on the undeniable fact the ICC’s opening budget in 2004 was €53 million, whereas in 2016 it requested €153.3 million and ultimately received €139.9 million – arguably much less than it needed to function effectively.

“The increase in the court’s budget shouldn’t really be compared on a yearly basis but should be based on its workload, which is growing constantly”, says Elizabeth Evenson of Human Rights Watch.

“There were a few years where the workload really started to take off, around 2010 and 2011, but even so, some states were still insisting that the budget be held to near-zero growth.”

Last November, a move by 11 states – Canada, the UK, Germany, Italy, France, Spain, Poland, Japan, Venezuela, Colombia and Ecuador – to restrict the court’s funding led to warnings that to do so would “wreck” its ability to open new investigations, something the world had been demanding.

In a hard-hitting statement at the time, Amnesty International accused those countries of “hypocrisy” – and of giving “cynical” mixed messages to the court and to those in conflict zones depending on it for redress in cases of genocide, war crimes and crimes against humanity.

“The hypocrisy here is at a new level, supporting further investigations (importantly, outside of Africa) one day but refusing to fund them the next,” Amnesty said. “If countries are really serious about ensuring the court’s efficiency, they should work to fill every desk in The Hague and in its field offices as soon as possible to ensure it addresses its backlog of investigations and delivers justice to as many victims as possible.”

As further evidence of the inclination of apparently supportive countries to drag their financial heels, it emerged that €17.88 million of the 2016 contributions from member states and €15.95 million from previous years remains unpaid – total arrears of €34.16 million.

That provoked an unusually tough response from the Coalition for the ICC, which represents 2,500 civil society organisations in 150 countries and usually attempts to smooth over internal differences.

“The small but influential group of ICC member states who have decided the court will not get the budget it needs are crippling its ability to open new investigations and increase its impact.

“This double standard on the part of some states means that victims of the most heinous crimes will lose out and feeds into unjustified perceptions of bias on the part of the court.”

International law expert, Matt Brown, in the blog, Opinio Juris, goes further: “The financial strangulation of the court . . . is, if anything, a far greater threat to the court’s ability to fulfil its mandate than the withdrawal of three states.”

Ominously, those who monitor the ICC in a global context warn that a new wave of nationalism represented by Donald Trump in the US and Brexit in the UK will play into this threat. A new concern for national sovereignty and how to protect it from “outside interference” could leave the ICC with even fewer real governmental friends.