Donald Trump criticises US courts as ‘so political’

Court room drama streaming across the nation Tuesday as the Trump administration argued to reinstate its temporary travel ban on seven Muslim-majority nations and all refugees. That wreaked havoc across the U.S. and around the world. 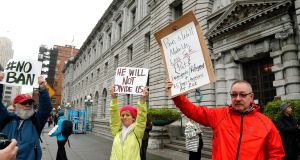 During a more than hour-long oral argument, a three-judge panel pressed a government lawyer whether the Trump administration’s national security argument was backed by evidence. Photograph: John G Mabanglo/EPA

US president Donald Trump stepped up his criticism of the US judicial system on Wednesday, saying the courts seem to be “so political”, a day after his travel ban on people from seven Muslim-majority countries entering the country faced close scrutiny from a federal appeals court.

A three-judge panel of the San Francisco-based 9th US Circuit Court of Appeals on Tuesday heard arguments on the Trump administration’s challenge to a lower court order putting his temporary travel ban on hold.

The appeals court is expected to issue a ruling as soon as Wednesday.

The legal fight over Mr Trump’s ban ultimately centres on how much power a president has to decide who cannot enter the US and whether the order violates a provision of the US constitution that prohibits laws favouring one religion over another, along with relevant discrimination laws.

However, the appeals court is only looking at whether a Seattle court had the grounds to halt Mr Trump’s order, while the case challenging the underlying order proceeds.

“I don’t ever want to call a court biased,” Mr Trump told a few hundred police chiefs and sheriffs from major cities at a meeting in Washington.

“So I won’t call it biased. And we haven’t had a decision yet. But courts seem to be so political. And it would be so great for our justice system if they would be able to read the statement and do what’s right.

“I think it’s a sad day. I think our security’s at risk today,” Mr Trump said.

Mr Trump’s January 27th executive order barred travellers from Iran, Iraq, Libya, Somalia, Sudan, Syria and Yemen from entering the US for 90 days and all refugees for 120 days, except those from Syria, whom he banned indefinitely.

The appeals court must decide if Mr Trump acted within his authority or whether his directive was tantamount to a discriminatory ban targeting Muslims.

“If these judges wanted to, in my opinion, help the court in terms of respect for the court, they’d do what they should be doing,” the Republican president said.

Last week, Mr Trump labelled the judge who put his directive on hold, US District Judge James Robart of Seattle, who was appointed by Republican president George W Bush, a “so-called judge”.

Last year, Mr Trump also sharply attacked a judge who was presiding over a case involving one of his businesses.

In a Twitter post earlier on Wednesday, Mr Trump wrote: “If the US does not win this case as it so obviously should, we can never have the security and safety to which we are entitled. Politics!”

At the meeting with law enforcement officials on Wednesday, Mr Trump read from the law he used to justify the travel ban, quoting it in fragments and sprinkling bits of interpretation in between.

He said the law clearly allowed a president to suspend entry of any class of people if he determines they would be a detriment to national security.

During an oral argument lasting more than an hour on Tuesday, the appeals court panel in San Francisco had pressed an administration lawyer over whether the Trump administration’s national security argument was backed by evidence that people from the seven countries posed a danger.

The appeals court judges had questioned whether the directive improperly targeted people because of their religion.

Judge Richard Clifton, who was appointed to the bench by Bush, also posed equally tough questions for a lawyer representing Minnesota and Washington states, which are challenging the ban.

August Flentje, representing the Trump administration as special counsel for the US justice department, told the appellate panel that “Congress has expressly authorised the president to suspend entry of categories of aliens” for national security reasons.

“That’s what the president did here,” Mr Flentje said, at the start of the oral argument conducted by telephone and live-streamed on the internet.

When the 9th Circuit asked Mr Flentje what evidence the executive order had used to connect the seven countries affected by the order with terrorism in the US, Mr Flentje said the “proceedings have been moving very fast”, without giving specific examples.

He said both Congress and the previous administration of Democrat Barack Obama had determined that those seven countries posed the greatest risk of terrorism and had in the past put stricter visa requirements on them.

“I’m not sure I’m convincing the court,” Mr Flentje said at one point.

Noah Purcell, solicitor general for the state of Washington, began his argument by urging the court to serve “as a check on executive abuses”.

“The president is asking this court to abdicate that role here,” Mr Purcell said. “The court should decline that invitation.”

Judge Clifton referred to recent televised statements by former New York mayor Rudy Giuliani, who advised Mr Trump during his campaign and transition, that the president had asked him for advice about implementing a legal Muslim ban.

“Do you deny . . . the statements attributed to then candidate Trump and to his political advisers and most recently Mr Giuliani,” Judge Clifton asked. “Do you deny that those statements were made?”

The 9th Circuit said at the end of the session it would issue a ruling as soon as possible.

The matter will ultimately likely go to the US Supreme Court.

Judge James Robart had suspended the order last Friday and many travellers who had been waylaid by the ban quickly moved to travel to the US while it was in limbo.