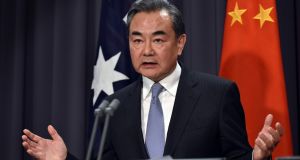 Just days after Donald Trump made a hectoring phone call to prime minister Malcolm Turnbull, China has pledged stronger relations with Australia and warned the US president against interfering in the region.

Since Mr Trump’s ascent to power, his protectionist approach, combined with his “America first” policy and more aggressive attitude to China, has seen Beijing strive to forge closer alliances with its neighbours.

Links between Beijing and Canberra are close, with Australia providing many of the resources for China’s economic boom of recent years. China is also Australia’s most valuable source of tourism, with 1.2 million Chinese tourists visiting last year.

Australia has been negotiating with China to salvage something from the ashes of the 12-nation Trans-Pacific Partnership (TPP), which has collapsed since Mr Trump withdrew, and also from the highly publicised tense phone call between Mr Trump and Mr Turnbull over refugees, which has placed further strains on what has been a long alliance between Australia and the US.

During a visit to Canberra, China’s foreign minister, Wang Yi, advised the US to “brush up on” its South China Sea history, after Washington said it would push back against Beijing’s claims to territories in the disputed waterway, through which passes €4.5 trillion in trade every year.

The Chinese leadership is furious about comments by secretary of state Rex Tillerson, who has said China would “not be allowed” to access the territories in the South China Sea and who has pledged to defend “international territories”.

Mr Wang said the 1943 Cairo Declaration and 1945 Potsdam Declaration after the second World War clearly stated that Japan had to return to China all Chinese territory taken by Japan, “including the Nansha Islands”, using China’s name for the Spratly Islands.

Beijing has constructed a number of artificial islands on reefs in the waterway, equipped with airstrips for military aircraft and anti-aircraft missile batteries, to back up its claims to most of the South China Sea.

Mr Wang said Japan had occupied the reefs around the Spratlys during the second World War.

“Afterwards, certain countries around China used illegal methods to occupy some of the Nansha Islands and reefs, and it’s this that created the so-called South China Sea dispute,” said Mr Wang.

China is committed to talks about the issue and would resolve it with “historical facts and international law”.

China’s claims are contested by Brunei, Malaysia, the Philippines, Vietnam and self-ruled Taiwan.

Last year, an international maritime court in The Hague ruled that Beijing’s claims were baseless after an application from the Philippines.

During his visit, Mr Wang has also been busily underlining China’s globalisation credentials. Since Mr Trump took office with warnings of trade restrictions and protectionism, China has sought to position itself as a champion of globalisation.

In a meeting with Mr Wang, the Australian premier said that, as a country that has benefited from free trade, Australia would make joint efforts with China to resolutely oppose protectionism.