Tara Palmer-Tomkinson found dead at her home in London 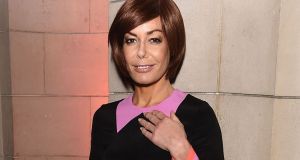 Tara Palmer-Tomkinson, the socialite, TV presenter and friend of the royal family, has been found dead at her London flat.

The former “It Girl” who had appeared on the show I’m a Celebrity ... Get Me Out Of Here, had recently revealed she was being treated for a brain tumour that was a non-malignant growth in her pituitary gland.

Scotland Yard said officers were called by the ambulance service at 1.40pm on Wednesday to an address in south-west London, adding: “A woman, aged in her 40s, was pronounced dead at the scene. At this early stage police are not treating the death as suspicious. Inquiries into the circumstances are ongoing. The coroner has been informed.”

Next of kin were also informed.

The 45-year-old was the daughter of the former Olympic skier and landowner Charles Palmer-Tomkinson and his wife, Patricia, who are friends of Prince Charles. Her older sister, Santa Montefiore, an author, is married to the historian and novelist Simon Sebag Montefiore.

The Prince of Wales and Duchess of Cornwall said they are “deeply saddened and our thoughts are so much with the family”.

Of her tumour, Palmer-Tomkinson told the Daily Mail in November: “I got terribly frightened. I started thinking, I’m going to die.”

The tumour, which was discovered following blood tests after she felt ill in the summer of 2015, had been successfully reduced by the treatment, she told the newspaper.

Palmer-Tomkinson had a well-documented battle with drugs in the past, and was first treated for a cocaine addiction in 1999. She spoke openly about her battle with drugs to discourage other drug users, once telling the talk-show host Jeremy Kyle that she had almost died after taking an overdose of cocaine.

At one time she was regularly on the London party scene, frequently making headlines and appearing in the pages of society and celebrity magazines. But she had spoken of struggling with anxiety in recent years which had seen her turn into a “recluse”.

In 2002 she appeared, as a contestant, on the reality TV series I’m a Celebrity ... Get Me Out Of Here and was a runner-up. She also appeared on several other TV shows, including celebrity specials of Blind Date, and A Place In The Sun.

1 Covid-19: Two-week quarantine period for arrivals into State could be lifted for some
2 Irish planning for no-deal Brexit to restart as EU-UK talks go badly
3 New rules for arrivals to Ireland start today - what is changing?
4 Miriam Lord: Taoiseach is trapped in a Zoom session from hell
5 Trump announces clampdown on social media companies
Real news has value SUBSCRIBE