Suzanne Lynch: America’s poor remain huddled in cities while others take to the hills

America Letter: Pandemic exposes gulf between the haves and have-nots and raises questions about consumerism 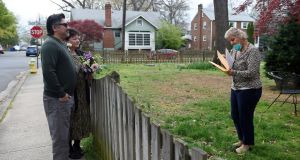 A Virginia state marriage official checks the marriage licence of a couple before performing the ceremony while maintaining social distance due to the Coronavirus outbreak in Arlington, Virginia. Photograph: Olivier Douliery/AFP via Getty Images

While in many ways the Covid-19 coronavirus is the great leveller, a disease that does not distinguish between country, race or religion, in other ways the pandemic has exposed the gulf between the haves and the have-nots. Nowhere more so than in the United States, the great beacon of capitalism – and inequality.

As most New Yorkers remained crammed on to the island of Manhattan and surrounding boroughs while the death toll rose, the wealthier residents of the city had already left for their country residences in nearby Connecticut, Vermont and New Hampshire.

Similar patterns were in train elsewhere – well-heeled Bostonians have long escaped to the beachside havens of Cape Cod, mid-westerners in Kansas and Nebraska favour the old resort town of Colorado Springs, while thousands of older Americans have chosen to sit out the pandemic in second homes in Florida.

Washington DC is no different. The neighbouring states of Virginia and Maryland have long functioned as weekend getaways for the city’s residents.

Earlier this week, as the capital settled-in for its third week of lockdown, we decided to drive west and into Virginia.

Snaking alongside the Potomac River that leads out of Washington DC before it meets the Shenandoah further north, the road soon gives way to the familiar American suburban landscape of strip malls and fast-food outlets.

The peculiar emptiness of the low-rise retail outlets was exacerbated by the coronavirus restrictions that have brought American commercial life to a halt, raising questions about the purpose and value of consumerism that keeps this economy alive.

Within an hour we found ourselves in the town of Leesburg.

Dating from 1740, it is one of many picturesque villages located across the state which was settled by English colonists in the early 17th century. Events from the arrival of the first settlers at Jamestown and slaves from Africa soon afterwards, to the civil war when Richmond was the de facto capital of the south, have long made Virginia a destination for history buffs.

Leesburg was named after Thomas Lee, an ancestor of Robert Lee, the commander of the Confederate army in the civil war. Outside the impressive courthouse, from where the declaration of independence was once read, stands a statue of an unnamed confederate soldier.

Nearby are memorials to locals who lost their lives in other wars – the US war of independence, the first World War, Vietnam. But it is the confederate statue that has pride of place, its armed soldier a defiant memorial to the pro-slavery southern side in the war. Like most of the confederate statues it was constructed in the early 1900s, half a century after the war itself, at a time when white hegemony and racial segregation were in the ascendancy.

Walking along the main thoroughfare of King Street, the pretty shops and inviting cafes have shut their doors. Coronavirus has put life on hold in small town America.

A small, well-spaced queue of customers alerts us to King Street Cafe, the only business open in the centre, serving coffee and pastries from a walk-up window.  A low-running engine and snippets of country rock emanating from shiny SUVs parked along the path break the silence on the warm summer day.

Further along, we settle on a grassy spot beside the river.

A young couple accompanied by a photographer pass by. Holding a small bouquet of spring flowers, the woman waves and explains from a distance that they got married, virtually, at the weekend.

“Well, what with the virus ...” she explains with her soft southern accent, her smile dazzling in the light.

As we move on, strains of music lead us to a welcoming building on the corner of Harrison Street. In the garden a piano player is entertaining senior citizens on a makeshift keyboard, singing Rock Around the Clock to a small group of residents who are sitting metres apart, enjoying the sunshine.

As the sun moves further down the sky, we take our leave of Leesburg, promising ourselves to return when the virus ends, whenever that may be. We make a detour to Waterford, a tiny hamlet established by a Pennsylvania quaker whose ancestors hailed from the south-east of Ireland.

In the distance, the inky shadows of the Blue Ridge Mountains loom. Along the winding roads of northern Virginia, the many wineries that populate this part of the country are closed for the foreseeable future.

And with that, we begin our drive back to Washington and to city life, our rural getaway already a memory.