Ciara Kelly’s Isolation Diary: ‘The virus is outside the door, but we’re still ripping the p*** out of each other’ 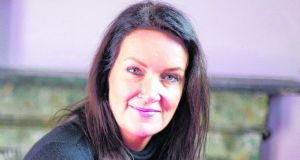 Ciara Kelly: the broadcaster and GP was one of the first public figures to be diagnosed with coronavirus in Ireland. Photograph: Tom Honan

Ciara Kelly, the broadcaster and GP, was one of the first public figures to be diagnosed with coronavirus in Ireland. She has recovered and is still broadcasting her daily Newstalk show, Lunchtime Live, albeit from her hot press at home in Greystones, in Co Wicklow.

She coughs as she answers the phone to me. “That wasn’t a sympathy cough!” she says quickly. She says she’s over the virus but is still “not 100 per cent... It sounds a bit pathetic, but I’m a bit weaker than I was. But I feel so much better. I feel lucky.”

What happened? “I got sick on a Saturday and felt increasingly sick over that week... Chest pain, shortness of breath, chest tightness – and it got worse from there. It’s an unusual thing for me to be sick, and I’ve never had some of these symptoms before. It was a fluey sort of thing, and my chest was burning. It hurt to breathe.” Her 17-year-old daughter also had the virus and was “quite unwell. She had high fevers.”

When did Kelly realise it might be Covid-19? “A basket of symptoms like that in a pandemic? I didn’t need to be a gifted physician to work it out.”

After she was tested and got the results, Kelly revealed on air that she had the illness. Then she felt obliged to broadcast the following day, despite feeling very ill, “because I worried I’d frighten the bejaysus out of people if I just disappeared.” She ultimately took three days off her show.

She has had an odd time over the past few weeks broadcasting from her hot press. “I probably could go happily back into the office, because I am, we believe, now immune and no longer infectious, but because of the instruction that nobody goes anywhere if they can work from home, I’ve been set up to work from home... Because there are six in the house, and it’s tricky to find somewhere that’s silent for two hours, I’m in the hot press. It’s a padded, muffled room, and I have an ISDN [line].”

It’s a strange moment in her career, Kelly says. “I put in a certain amount of spadework into moving away from the “doctor” thing so people would allow me to do other things in my media career. I’d stopped calling myself ‘Dr’ Ciara Kelly, because I didn’t want people to think it was a health show... That’s all over to some extent. It felt like the right thing to do to put the ‘Dr’ hat back. Some queries I get on the show I wouldn’t be able to answer if I wasn’t a doctor...

“I was on with Joe Duffy, which was strange because he’s the competition, to be honest, and he said I was a weird Venn diagram of broadcaster, doctor and patient.

“I have a very strong feeling of responsibility. I’ve made contact with the HSE about going back to work in A&E or as a GP, wherever is most useful. I could do afternoons or evenings. I feel moved by the bravery of my colleagues on the front line and feel a need to join them.”

What’s her day-to-day life like outside of work now? “My routine is only re-establishing itself now... Myself and my daughter were in bed for the guts of two weeks. You’d get up and feel like you were going to fall over and get back into bed... Everyone is sleeping in later. We’ve all shifted our body clocks. It’s like we’re living on Moscow time now and no longer on GMT.

“I drink a lot of coffee and tea and potter a bit. I’m someone who definitely needs solitude and time on my own, so I lurk into my bedroom at times... I’m taking the half-an-hour walk from my house within the 2km, and to be honest we’re eating and drinking more than we should, because these things become the focus of your day when life is very small...Every dinner is like Sunday dinner... I’ve started watching an old movie, a feelgood movie, at night.”

Are there positives in this? “I don’t want to be glib or flippant, because people will lose their lives, but, whether we like it or not, after you come through adversity you grow in some way. I know from bereavements or hard times in my life that I got stronger from them. I wouldn’t want to have gone through them, but that was a side effect...

“I was thinking about it last night around the dinner table. The teens weren’t peeling off as normal and we were there for two hours, and there was a lot of laughter and slagging and messing... I had a gin and tonic and I thought, This is really nice.

“It’s weird, because in the background there’s the inescapable knowledge we’re here because the virus is outside the door – and, in our family’s case, it was inside the door for a while – but we were still laughing and ripping the piss out of each other. I did say, ‘There are worse people to be stuck with. The people I love most are in this room.’ There was a lot of goodness in that moment. It’s important for me to remember those good things. It could be worse.”