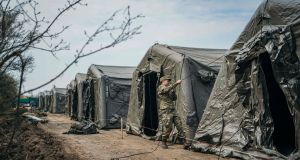 Romanian military personnel set up a mobile hospital in the outskirts of Bucharest, Romania. Romania’s doctors and nurses have started speaking out against shortcomings in the fight against the new coronavirus. Photograph: Getty

Two airliners that landed at a virus-becalmed Vienna airport this week exposed the gulf between how rich and poor parts of Europe are able to cope with the coronavirus pandemic.

The planes arrived from the Bulgarian capital Sofia and the western Romanian city of Timisoara, and they carried a total of 231 health workers from those countries who will help care for elderly people in Lower Austria.

The regional authority chartered the planes to ensure that virus-related border closures in central Europe did not lead to shortages of health staff, particularly for Austrians who need 24-hour care. The workers are now being provided with hotel accommodation for their 14-day quarantine before starting placements that are expected to last longer than usual – perhaps six weeks or more.

“I can’t tell you now whether this will be a one-off action or not,” regional social affairs official Christiane Teschl-Hofmeister told Austria’s Oe1 radio station. “If the need presents itself again we will try to do everything we can to fulfil it.”

Millions of people have moved from central and eastern Europe to wealthier western countries over the last 20 years, including tens of thousands of doctors and nurses whose expertise offered an escape from the low wages, decrepit facilities and corruption that blight many hospitals in the EU’s newest member states.

That brain drain and lack of investment has left much of the region in poor shape to fight a health crisis like the Covid-19 pandemic, which is expected to accelerate from the Baltic to the Balkans in the coming weeks.

The problems facing wealthier EU countries – such as a lack of testing kits, protective equipment and ventilators – are even more severe in countries like Romania and Bulgaria, where they combine with low morale, cronyism and deep mistrust of officials to create potentially catastrophic situations.

Dozens of medics have resigned, retired and taken leave in Romania in recent days rather than tackle an influx of Covid-19 patients with inadequate equipment, prompting the government to look at ways to make it harder for doctors to quit.

More than 700 of Romania’s 3,183 confirmed cases of the virus have occurred in the northern Suceava county, where about 200 of those infected are medical workers. The country of 19 million has registered 122 deaths from Covid-19.

Suceava’s main emergency hospital was closed for disinfection and its manager sacked for allegedly mishandling the outbreak. His replacement resigned after less than a week, however, leading the government to put a military doctor in charge of the facility, where at least 30 patients have died from the virus.

Romanian president Klaus Iohannis assured staff at the hospital this week that protective equipment and other supplies were on the way, and he called on the government to tap EU funds to pay a €500 monthly bonus to every medic treating Covid-19 patients.

Dozens of doctors and nurses have also quit in protest at poor equipment and conditions in neighbouring Bulgaria, where 477 people have been confirmed with coronavirus, 12 of whom have died.