US must end ‘lawlessness’ of illegal immigration, says Sessions

Senator Jeff Sessions, Trump's controversial pick to head the Justice department, was confirmed by the Senate on Wednesday, after several Democratic senators vehemently urged their colleagues to vote against him. 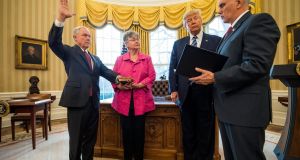 US vice-president Mike Pence swears in attorney general Jeff Sessions while Sessions’s wife, Mary and US president Donald look on in the Oval Office of the White House. Photograph: Jim Lo Scalzo/EPA

Newly appointed US attorney general Jeff Sessions has said that the US must bring illegal immigration to an end, as he was sworn in as the nation’s top prosecutor.

Speaking at a ceremony in the White House on Thursday, the former senator from Alabama pledged to “end this lawlessness that threatens the public safety . . . and pulls down the wages of working Americans”.

Mr Sessions was endorsed by the Senate by a vote of 52 to 47 on Wednesday night. But the vote followed a bitter Senate debate during which Massachusetts senator Elizabeth Warren was forbidden from contributing after she was deemed to be in breach of senate rules after reading a letter from the wife of Martin Luther King opposing Mr Sessions’s appointment as a federal judge in 1986.

Speaking after receiving the oath from vice-president Mike Pence in the Oval Office on Thursday, Mr Sessions said that the US needed “a lawful system of immigration, one that serves the interest of the people of the United States. That’s not wrong, that’s not immoral, that’s not indecent.”

Mr Sessions, who was one of Donald Trump’s earliest supporters during the presidential campaign, also pledged to crack down on crime.

Scrutiny of Mr Trump’s cabinet nominees continued on Thursday, with Tom Price, the nominee for health and homecare, facing a vote on his nomination. The debate on the Senate focused on the Georgian Republican’s plans for repealing Obamacare.

Tensions between Democrats and Republicans over Mr Trump’s policies have spilled over into Capitol Hill in recent days with Democrats seeking to delay and undermine his nominees for cabinet positions.

Meanwhile, Mr Trump lashed out at US senator Richard Blumenthal after the Democratic senator revealed that supreme court nominee Neil Gorsuch had told him he found Mr Trump’s criticism of the judiciary “disheartening” and “demoralising”.

Mr Trump on Twitter accused Mr Blumenthal of misrepresenting what Mr Gorsuch had told him, noting that the senator “never fought in Vietnam when he said for years he had”.

He reiterated his comments during a lunch meeting with Republican senators on Thursday.

A number of senators backed up Mr Blumenthal’s claims about Mr Gorsuch’s comments. The supreme court nominee is undertaking a series of meetings this week in Capitol Hill where he is meeting both Republicans and Democrats.

Mr Trump also gave a strong indication that an announcement on his long-awaited corporate tax policy is forthcoming.

In a move that will be closely watched by Irish authorities, he promised a “phenomenal” announcement regarding tax in the coming weeks, promising to tackle “burdensome regulations” and “lowering the overall tax burden of American businesses”.

Mr Trump is considering cutting America’s 35 per cent corporate tax rate to between 15 and 20 per cent, and introducing a border adjustment tax which would tax imports coming into the US but exempt exports. While the move is expected to hit exporters such as Mexico, Canada and China hardest, there are concerns that any tax on imports could affect the pharmaceutical and medical device industries in Ireland which export to the US.

Speaking to The Irish Times last week, White House press secretary Sean Spicer played down any adverse impact on the State from Mr Trump’s tax reform, arguing that greater competition would be good for both countries.

Wall Street has been awaiting details of Mr Trump’s corporate tax reforms which he flagged during the presidential campaign, with stock markets rising on Thursday in anticipation of further detail.

In particular, there are differences within the Trump administration about the shape of any border adjustment tax, with White House National Economic Council director, Gary Cohn, suggesting last week that it was only one option on the table. Mr Trump himself previously said it was “too complicated” but has appeared to endorse the concept in recent statements.

Kevin Brady, chairman of the ways and means committee, has been meeting with senior Republicans in Congress this week on Capitol Hill to discuss the proposed reform amid scepticism from some Republicans.