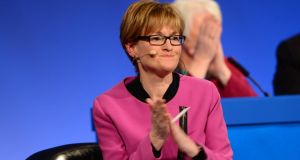 Mairead McGuinness: The Irish MEP lost her bid to become a candidate for president of the European Parliament, with 57 votes to winner Antonio Tajani’s 94. Photograph: Dara Mac Donaill

The nomination of an Italian MEP as the European People’s Party (EPP) candidate for president of the European Parliament has dashed Irish hopes of having a second parliament president, following Pat Cox’s tenure in 2002-2004.

Mairead McGuinness was a strong favourite to succeed Martin Schulz in January, so the development is undoubtedly a personal disappointment for the Irish MEP. McGuinness has assiduously built a strong profile in the parliament since 2004, culminating in her appointment as one of 12 parliament vice-presidents in 2014.

In the run-up to Tuesday’s poll, it became apparent that the vote would be a run-off between McGuinness and Italy’s Antonio Tajani, with veteran French politician Alain Lamassoure losing support in recent weeks and Slovenian Alojz Peterlé’s candidacy never really getting off the ground. This played out in the final result, which saw 94 votes for Tajani and 57 for McGuinness, while Lamassoure secured 38 and Peterle 18.

Sources say Tajani benefitted from a “southern push” with backing from EPP members from Italy, Spain and Portugal. Polish MEPs are also understood to have supported Tajani, finding common ground with his industrial policies. With German members representing 34 of the total 214 EPP seats, the German position was always going to be crucial. In the end, it appears the German vote was essentially split between Tajani and McGuinness.

The Italian MEP’s victory took many Brussels watchers by surprise.

Tajani (63), a former journalist and former spokesperson for Italian prime minister Silvio Berlusconi, has a strong background in European politics. He was first elected to the parliament in 1994, and was appointed EPP vice-president in 2002.

In 2008 he was appointed by Berlusconi as Italy’s EU commissioner, replacing Franco Frattini in the transport brief. Tajani moved portfolio under the second Barroso commission in 2009 and became EU commissioner for industry and entrepreneurship, a position he held until 2014.

According to some sources, Tajani faces an uphill battle in securing the support of the wider parliament on January 17th, when all 751 MEPs vote on Martin Schulz’s successor.

Tajani has become embroiled in controversy in recent months over the Volkswagen emissions scandal, which happened under his watch at the commission. Grilled by MEPs as part of the European Parliament inquiry in September, Tajani said he had never been informed about the use of defeat devices by the industry while commissioner.

In particular, Green MEPs, who are understood to have supported McGuinness’s candidacy, may oppose Tajani in light of the emissions controversy.

Ultimately, power to elect the next parliament lies with the two largest groups, the EPP and S&D, which can pool their votes to elect a candidate. But the prospect of a deal between the two ahead of the January election is by no means certain. The two have effectively formed a “grand coalition” since 2014, but tensions over the next parliament president have threatened this informal arrangement.

Gianni Pittella, the S&D candidate, who is also an Italian, threatened to derail the coalition this week, arguing that a centre-left politician should head the parliament. Otherwise, he argued, the three main EU institutions will all be led by centre-right politicians.

One conspiracy theory aired since the EPP vote on Tuesday is that Pittella and the Italian members of the S&D may back Tajani on the condition that one of the other EU top jobs is opened to a centre-left candidate. This could put pressure on European Council president Donald Tusk. Tusk is popular with EU leaders, but his role technically comes up for renewal after 2½ years, and there have been suggestions that the Polish government could veto his reappointment.

European Commission president Jean-Claude Juncker has struggled to connect with the wider EU public, but is due to remain in situ until the next European elections in 2019.

Whoever becomes the next parliament president will assume the role at a challenging time. With Brexit and a series of national elections in 2017, communicating the positives of EU membership to the public will be a key skill.

In his farewell speech in Strasbourg on Wednesday, Schulz said the “transnational democracy” embodied by the EU was in “great danger” and warned of the rise of “dividers and ultranationalists” across the continent.

Ensuring that the ideal of European co-operation remains relevant to citizens across the bloc will be a key challenge for his successor.