Rupert Murdoch ‘sat in on Gove interview with Trump’ 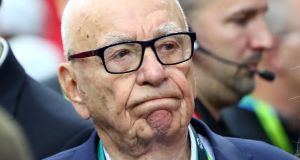 Chairman of News Corp Rupert Murdoch: two people have confirmed he was in the room when Donald Trump was interviewed by Michael Gove. Photograph: Al Bello/Getty Images

It was the journalistic coup of the moment, the first British newspaper interview with Donald Trump since his victory. But there was one thing the Times of London did not reveal: that its proprietor Rupert Murdoch was sitting in on the conversation.

The chairman of News Corp did not feature in photographs of the encounter last month at the top of Trump Tower in Manhattan but two people have confirmed he was in the room. The interview was conducted by Michael Gove, a former British cabinet minister and proponent of the UK’s exit from the European Union.

Mr Murdoch’s presence is a sign of the mogul’s interest in Mr Trump and his close relationship with the new president and his family.

The Financial Times revealed this week that the president’s eldest daughter, Ivanka Trump, was until recently a trustee of Grace and Chloe, Mr Murdoch’s two young daughters by his ex-wife Wendi Deng.

Ms Trump represented the girls’ interests in 21st Century Fox and News Corp, the two companies that are controlled by the Murdoch family. Ms Trump is married to Jared Kushner, a key White House adviser – and a confidant of Mr Murdoch. A spokesperson told the Financial Times that Ms Trump stepped down from the trustee board on December 28th last year.

Mr Trump and Mr Murdoch are in regular contact while Mr Murdoch, who has been running Fox News Channel since Roger Ailes was pushed out last summer, has positioned the network squarely behind the new president.

In the interview Mr Trump riled America’s European allies by describing Nato as “obsolete” and the EU as a “vehicle for Germany”. It was unclear whether Mr Murdoch played a role in securing the interview.

Mr Gove announced in February 2016 that he would campaign for the Leave side in Britain’s EU referendum infuriating many of his pro-EU cabinet friends including David Cameron, the then prime minister.

After Mr Cameron’s resignation Mr Gove helped run Boris Johnson’s leadership campaign. But at the last minute Mr Gove announced that he, too, was standing – prompting accusations of treachery.

Just days earlier, Mr Murdoch had said he would be “happy for Michael Gove to get it”, describing him as the most principled and most able candidate. “He could run a fine government,” he said.

According to Tim Shipman’s book about the Brexit campaign, All Out War, Mr Gove put himself forward after taking a phone call from an influential “media power broker”.

Ultimately, however, his leadership bid went down in flames and he is now on the backbenches.

Mr Gove is currently paid £150,000 a year to write for the Times, which is owned by News Corp, on top of his salary as an MP. He did not respond to requests to comment.

He wrote the interview with Mr Trump alongside Kai Diekmann, a journalist with Bild, the German newspaper.

In the interview published by the Times Mr Trump extolled Brexit and said British people were fed up with taking in refugees.

“People, countries, want their own identity and the UK wanted its own identity. But, I do believe this, if they hadn’t been forced to take in all of the refugees, so many, with all the problems that it . . . entails, I think that you wouldn’t have a Brexit.”

Mr Trump also laid into Angela Merkel, the German chancellor, saying: “I think she made one very catastrophic mistake and that was taking all of these illegals.”

Mr Gove was a former leader writer at the Times before he became an MP. Appearing at the Leveson Inquiry into press standards, he described the Australian media tycoon as “one of the most impressive and significant figures of the last 50 years”. – (Copyright The Financial Times Limited 2017)