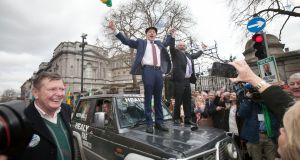 Michael and Danny Healy-Rae on the bonnet of an SUV to celebrate the first meeting of the 32nd Dáil, outside Leinster House. File photograph: Alan Betson

Could the Trump phenomenon of disgruntled voters electing a disruptive business tycoon with a big mouth happen in Ireland? Yes. It’s been happening already for over 40 years in Ireland’s Deep South.

The Healy-Rae empire has been producing TDs and county councillors since God was a gasún, proving a comb-over and a cap was a political force long before Trump took it global.

They too espouse anti-immigrant, climate-sceptical, barmy-policy, anti-PC ideas and resemble an Irish version of the Donald right down to reality TV appearances, crazed fans and attacks on the media.

Their politics are tied up with Trumpian conflicts of interest too and they even built an expensive wall in Killorglin.

The similarities of this brand-focused family to the US president’s is such that the collective noun should be a “Trump” of Healy-Raes. They think “Kerry first!” and, given their love of dancing on SUV bonnets, also believe in torture.

The late Jackie Healy-Rae had something of a State funeral in Kerry where supporters celebrated how he “screwed millions” out of Bertie Ahern as the price of his support.

He certainly served the interests of his parish, but the only people he screwed were taxpayers elsewhere.

Jackie’s revered status among his successors, sons Michael and Danny, is identical to the Donald’s obsessive view of Fred, father of the Trump realm. Michael Healy-Rae inherited the Kerry South seat in 2011, unaffected by his father’s support for the boomtime Bertie governments in a secret deal.

He was already a household name after appearing on RTÉ’s Celebrities Go Wild. A phone in Leinster House made 3,500 calls voting for him on the show, which he won. Although he denied wrongdoing, he paid the €2,600 bill in full.

The Healy-Raes are also experts in media manipulation, simultaneously using it to raise profile by saying outrageous things while attacking it for criticising their faults.

Insane ideas such as drink-driving permits for Kerry farmers won attention, alongside speeches denying climate change claiming that only “God above is in charge of the weather”.

Danny Healy-Rae’s distinctive speaking style is to throw back his head and close his eyes sean nós singer-style, as his voice booms like the wind tromboning through Skellig Michael.

He makes the news only as political entertainment, producing knee-slapping support from admirers.

Despite wealth and privilege, both Trumps and Healy-Raes manage to portray themselves as victimised outsiders.

They paint media as arch-enemies, once dismissing negative coverage as “racism”. Michael might know, since he has such little time for refugees.

As a councillor in 2000, he said the vast majority were “freeloaders, blackguards and hoodlums”. Around the same time, his father was lobbying on behalf of a constituent for a paid State contract to accommodate asylum seekers.

Michael was at it again after the Brexit vote saying it would mean “immigrants bound for the UK” would come to Ireland instead, causing wages to fall and putting pressure on housing and schools.

The Kerry family legacy is littered with examples where their political positions conflict directly with their business interests.

Michael protested against Allsops auctions of distressed assets but bought one of them subsequently.

Like Trump, their brand of comedy politics seems to hypnotise a shocked media against proper scrutiny of their agenda. Broadcasters rush to interview Danny after his latest climate-change rant, but always fail to remind audiences that their businesses include a filling station, plant hire and cattle farms – interests that would suffer if Ireland took climate action on fossil fuels and methane emissions.

The only major difference is that Trump boasts about his wealth and intelligence while the Healy-Raes carefully conceal theirs.

It’s difficult to talk about how Kerry isn’t getting its fair share of tax money while the Healy-Raes get rich on it.

Between Dáil and council salaries, huge expenses and State contracts, the family has earned multimillions.

Their TDs’ expenses are legendary and the two brothers clocked up €10,000 between them last March when the Dáil only sat for two days.

Voters have no capacity to distil distasteful facts about their TDs when dancing on bonnets is the only image they can recall.

As in the Trump phenomenon, you cannot condemn those who elect Healy-Raes. Voters overlook the ugliness of their methods because they undoubtedly work hard at providing citizens with access to services.

However, those citizens don’t seem to realise or care that they’re already entitled to those services, and that it’s to the benefit of the political dynasty that they preserve that dysfunction.

If Kerry is so neglected and in such need of help, how come they haven’t managed to fix it over the course of 44 years in political office?

With two Dáil seats, two council positions and ambitions for Europe, the empire is strong. So let’s just be glad this most nuclear of families doesn’t have any launch codes.

Ironically, climate change might one day send a tidal wave across it and flood the county. They’ll probably win the contract to rebuild it.

1 Murder in a crowded house: The full story of the Patricia O’Connor trial
2 Shane Ross: ‘I lost a friendship with Mattie McGrath completely. He got totally personal’
3 Britain is uncomfortable because Ireland has the upper hand for the first time
4 Areas advised to ‘stop everything’ as Storm Jorge hits Ireland
5 Soreness is good, scales are pointless: The 10 biggest myths in fitness
Real news has value SUBSCRIBE